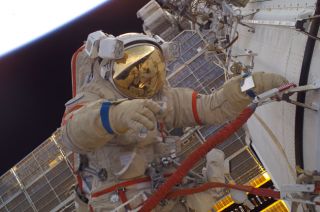 For $35 million, space tourists could spend 18 days in space and stage a 90-minute spacewalk in a Russian Orlan spacesuit like that worn here NASA astronaut John Phillips during an August 2005 spacewalk.
(Image: © NASA.)

It may bethe pinnacle of travel perks, but the only firm arranging private trips to theInternational Space Station (ISS) is now offering a bonus spacewalk for clientswilling to pay for more than a standard $20 million trip.

The Vienna,Virginia-based firm Space Adventures announced Friday that future payingvisitors the space station can take a 90-minute spacewalk, or extravehicularactivity (EVA) and extend their orbital trip by up to eight days for an addedcost of about $15 million.

"It's alogical extension," Eric Anderson, Space Adventures' president and CEO, said ofthe spacewalk availability in a telephone interview. "It's one of the perhaps premierexperiences of spaceflight."

SpaceAdventures has brokered deals with Russia's space agency to launch three spacetourists - or spaceflight participants - to the ISS since 2001, when U.S.entrepreneur Dennis Tito rode aSoyuz spacecraft to the orbital laboratory. South African businessman MarkShuttleworth followed in 2002, with Americanscientist-turned-entrepreneur GregoryOlsen reaching the ISS in 2005.

Japanesebusinessman DaisukeEnomoto is now set to become the fourth paying visitor to the ISS noearlier than Sept. 14, when he launches toward the station with Expedition14 astronauts Michael Lopez-Alegria and Mikhail Tyurin.

Like hispredecessors, Enomoto is set to spend 10 days in space, eight of them aboardthe ISS, as part of his $20 million deal with Space Adventures and the FederalSpace Agency. U.S. entrepreneur and renowned spaceflight supporter AnoushehAnsari, of Texas, is Enomoto's backup.

But Enomotowill not walk in space during his flight because of the additional trainingneeded, Tearne said.  An extra month - or about 190 hours - on top of thetypical six-month training would be required for spacewalking client, sheadded.

Meanwhile,NASA officials said they had yet to be notified about any plan by itsinternational partners to sell spacewalk experiences.

"We have not yet been informed by any of our partners about an intention tosell spacewalks," NASA spokesperson Melissa Mathews told SPACE.com,adding that the agency does have processes in place to review ISS crew assignmentsand spacewalk safety.

Andersonsaid Space Adventures has spent between one and two years studying thefeasibility of a spaceflight participant spacewalk.

"They wouldjust go right out the airlock and they would stay pretty close," Anderson saidof prospective paying spacewalkers. "They would just look around and enjoy it;it's not something that involves an incredible amount of risk. They're goingout and they're coming back in after an hour an a half."

Russianspace officials said they have completed an in-depth study of the risksinvolved with a space tourist-staged spacewalk.

"At theconclusion of our internal feasibility assessments and after carefulconsideration, we have come to the conclusion that subject to the personalphysical and psychological capabilities and with the completion of additionalspecific cosmonaut training, spaceflight participants could potentially performan EVA," Russia's Alexei Krasnov, director of manned spaceflight for theFederal Space Agency, said in a statement.

Accomplishedprofessional spacewalkers said that at the basic level, there is no majorobstacle between a space tourist and a 90-minute jaunt outside the ISS.

"There isrisk involved in going outside, but if you're going to sign up for that andaccept the risk, that's fine," three-time spacewalker and former NASA astronautTom Jones told SPACE.com. "I think it is an incomparable personal experience."

Jones, whoauthored the book Skywalking to document his spaceflight career andserves as an astronaut advisor for Space Adventures, added that as long asspace tourists have the finances, training and physical fitness to stage aspacewalk, few hurdles remain to marvel at the Earth and space from inside aspacesuit.

During a90-minute EVA, which is the time it takes the ISS to make one complete orbitaround Earth, a spacewalker would experience orbital sunrise and sunset, Jonessaid.

"That 90minutes is like gold to a real spacewalkers," Jones said. "I got a total offive or 10 minutes of doing that in my 19 hours in terms of just unstructuredtime, so it's literally that precious an experience."