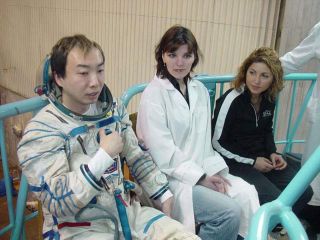 "Theirtraining is going great so far and they're both fantastic clients," Anderson told SPACE.com.

In additionto Ansari, the backup crew named to support the Soyuz TMA-9 mission includesNASA astronaut Peggy Whitson and Russian cosmonaut Yuri Malenchenko.  Nodate has been set yet for Ansari's flight.

Rumors hadbeen circulating in Russian mediareports since mid-March that Ansari would be the backup, but the officialannouncement was made only today.

"Wejust decided to delay the announcement until such time as the crew wasofficially named," Anderson said.

"Anoushehand I first discussed the idea of her becoming part of the backup crew lastOctober," he said.

Ansari isperhaps best known for helping to provide the seed money for the Ansari X Prize spaceflightcompetition, which offered $10 million to the first team to build and launch aprivately-funded, piloted spacecraft to suborbital space and back twice in twoweeks. That contest was won by Burt Rutan's SpaceshipOnein June of 2004.

SpaceAdventures is the company responsible for brokering a series of flights to theInternational Space Station for high-paying entrepreneurs, beginning in 2001with U.S. businessman Dennis Tito. South Africanentrepreneur MarkShuttleworth followed in 2002, with U.S. scientist and businessman GregoryOlsen launching in 2005. Each of those flights, like Enomoto's, carried areported cost of about $20 million.

Like hispredecessors, Enomoto will spend about one week aboard the ISS before returningto Earth. Space Adventures officials have also announced that former Microsoft softwaredeveloper CharlesSimonyi is also set to visit the ISS. Anderson said that it's also possiblethat Ansari will fly on a future mission even if Enomoto makes his flight.

"Ifand when Anousheh decides to fly on an orbital mission, we will be very proudto announce that," he said.