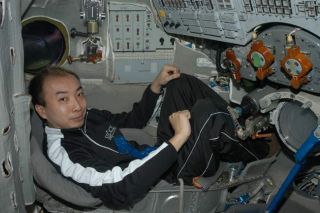 Russia'sGovernment Medical Committee found Daisuke "Dice-K"Enomoto, a 34-year-old Japanese entrepreneur, fit for training and the finalcontract for his 10-day spaceflight has been signed, according to the Arlington,Virginia-based Space Adventures, which brokered the trip.

Enomoto istaking Russian language courses and is immersed in the first phase of hiscosmonaut training, Space Adventures spokesperson Stacey Tearne told SPACE.com.Of his 10 days in Earth orbit, about eight of them will be aboard theInternational Space Station (ISS), she added.

Slated tolaunch toward the ISS this September with the station's Expedition 14 crew,Enomoto is the fourth paying visitor bound for Earth orbit. His planned flightfollows the ground-breaking launch of U.S. entrepreneur Dennis Tito in 2001, South African Mark Shuttleworth's 2002 spaceflight, and the2005 mission of U.S. scientist and businessman GregoryOlsen.

SpaceAdventures helped arrange all three of the previous flights, each with a reportedprice of about $20 million, aboard Russia's robust, three-person Soyuz TMAspacecraft. Enomoto and the Expedition 14 crew will launch aboard the SoyuzTMA-9 vehicle, the space tourism firm said.

"We lookforward to his launch in September when his dream of spaceflight will berealized and we hope and trust that he will be an inspirationto others around the world to pursue their own dreams of spaceflight," saidEric Anderson, Space Adventures CEO, of Enomoto in a statement.

Enomotocurrently resides in Hong Kong and works as an independent investor. He previouslyserved as executive vice president and chief strategic officer for theinformation technology firm Livedoor, and founded the website DICE-K.com.