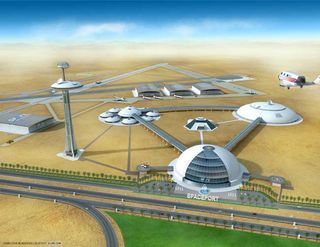 With a fleetof rocketships and two spaceports on the way, a high-flying tourism firm istaking passenger spaceflight to the next level.

In the lastweek, the Arlington, Virginia-based firm Space Adventures has announced plans fora new suborbital spacecraft and spaceports near major airports in the UnitedArab Emirates and Singapore that, it hopes, will draw eager customers seekingthe space experience.

"Thesesites in the United Arab Emirates and in Singapore are just the initial steps[for private spaceflight]," Space Adventures CEO Eric Anderson told SPACE.com."They are essentially the stead to rally around."

At the heartof Space Adventures' plan is the Explorer spacecraft, a vehicle to be developedunder a partnership with the Texas-based Prodea - a firm founded by the Ansarifamily, which put up the $10 million prize money and their namesake for the suborbitalX Prize competition.

"We are absolutelybuilding a global market," Anderson said. "I think it's a huge milestone inprivate spaceflight."

SpaceAdventures has been a staple of sorts for orbital space tourism,helping millionaires reach the International Space Station (ISS) on 10-daytrips with announced costs of about $20 million each. U.S. scientist and CEO GregoryOlsen - who reachedthe ISS in October 2005 - was the third and most recent space tourist.

It isCosmopolis from which Space Adventures' Explorer series is derived. Bothvehicles are designed to be launched via a parent aircraft - in this case, the M-55Xaircraft - much like the SpaceShipOnecraft that wonthe Ansari X Prize.

But whileCosmopolis was designed to carry two passengers and one pilot, Explorervehicles will haul up to five people to suborbital space.

"It'sactually much more advanced than [Cosmopolis]," Anderson said of the Explorersystem. "We haven't disclosed the design, but that doesn't mean that we don'thave one. We're announcing things one at a time."

MDB is alsodesigning the Explorer spacecraft for Space Adventures and Prodea. The Russianfirm assured that the vehicle will come equipped with "several excitingfeatures" to enhance a space tourist's flight experience.

"Additionally,the safety of the passengers is our chief aim, and the Explorer will make useof several safety systems that we have unique experience in designing andimplementing for the last 40 years," explained MDB chief designer ValeryNovikov in a written statement.

While SpaceAdventures has not yet released specific details about its Explorer vehiclesaside from their intended occupancy and maximum altitude, the fact that theywill launch from the same M-55X parent craft hints that they may be similar toCosmopolis, though the addition of two seats aboard Explorer suggests a largercabin.

Whetherthose details will hold for Explorer flights - which are expected to offer upto five minutes of weightlessness at a time - remains to be seen.

"Moreinformation will be announced in the future," Space Adventures spokesperson ErinLundberg told SPACE.com.

SpaceAdventures officials did say that it intends to sell Explorer vehicles to operatorcompanies to conduct the actual spaceflights.

At leasttwo passengers are apparently already set to ride aboard a Space Adventures-relatedsuborbital flight.

Accordingto an October 2005 report by China Daily, Chinese businessman Jian Fangreportedly paid $100,000 for a 90-minute suborbital spaceflight with SpaceAdventures. In September 2005, the space tourism firm itself announced that BrianEmmett of Mountain View, California had won a seat aboard a future suborbitalvehicle.

Bothflights were reportedly set for 2007 at the time. Space Adventures officials said they have received about 200 reservations for future suborbital flights from individuals representing 18 different countries.

Deals are alsoin place to construct a $265 million spaceport at the Ras Al-Khaimah InternationalAirport in Ras Al-Khaimah - the northernmost of seven emirates the United ArabEmirates (UAE) - with a $115 million facility to be built near Singapore's ChangiInternational Airport, Space Adventures officials said.

Andersonsaid Al Qasimi has been extremely supportive and invested $30 million into thespaceport project.

SpaceAdventures is also working with a consortium of investors in Singapore todevelop Spaceport Singapore, a facility that will offer not only suborbitalspaceflights, but also astronaut training, parabolic flights to simulateweightlessness, and other high-altitude attractions.

"With theproposed Spaceport Singapore, we now stand at the threshold of an unprecedentedopportunity to launch into space practically from our own backyard," said LimNeo Chian, chief of the Singapore Tourism Board, in a statement.

Theannouncement of both spaceports does not rule out American spaceport in SpaceAdventures' future, though several unrelatedprojects are already underway in the U.S.

In themeantime, the space tourism firm is pressing ahead with its orbital program.

Japaneseentrepreneur Daisuke"Dice-K" Enomoto is set to be the firm's next paying passenger to the ISSin October. His flight will follow those of Olsen,South Africa's MarkShuttleworth in 2002 and U.S. businessman Dennis Tito in 2001.

"There isstill a market for orbital spaceflight and I certainly hope it will continue,"Anderson said.