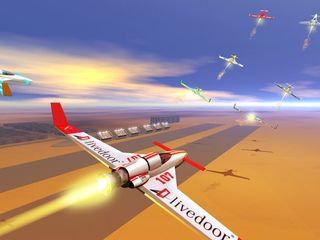 NEW YORK - TwoF-16 fighter pilots have tossed their hats into a high-flying ring as the firstteam to join the nascent RocketRacing League.

"Weconsider it a huge, exciting thing to be on the leading edge of our new sport,"Rickard said, adding that he and Grantham continue to fly F-16 jets with theU.S. Air Force reserves. "It's kind of a unique talent [to fly]."

To race inthe rocket league, Leading Edge pilots and their competitors are destined to racefor best times and prize money while zooming through a three-dimensional racecourse that comes complete with refueling pit stops. The league's X-racer rocketplanes are based on the EZ-Rocketdesign developed by XCOR Aerospace in Mojave, California.

"[Spaceflight]should be sexy, it should be edgy and fun," said Diamandis, who also foundedthe $10 million Ansari XPrize competition for private, manned suborbital spaceflight, as well asthe ZeroGravity Corp. for commercial weightless flights aboard a modified airplane,in an interview. "It should be more like Star Wars and Star Trek, and that's whatprivate enterprise can do."

The rocketleague's first Mark-1 X-racer - featuring a modified airframe built by VelocityAircraft and a single liquid oxygen and kerosene rocket engine - will debutduring the October 2006 XPrize Cup in Las Cruces.

With onlyfour minutes worth of fuel aboard and 10 minutes of unpowered flight available,X-racer pilots will be challenged to fire their rocket engines at vital times toovertake competitors before having to land and refuel during a planned90-minute race.

At least 10different teams - of which Leading Edge is the first - are expected to competein the Rocket Racing League's first full season in 2007, league officials said.No less than six courses will be laid out for the competition's first year,with four more to follow in the 2008 season, they added.

Prospectiveteams must lay down a $100,000 deposit - to be put toward the group's Mark-1X-racer - as well as be able to cover the rocket ship's $1.2-million cost andannual operating costs of up to $1 million. Once chosen, the teams will functionindependently, and are responsible for all hiring, training and meetingrequirements set by the league and the Federal Aviation Administration (FAA).

"From ourwebsite alone, we've been approached by 50 different groups," Diamandis said,adding that they are being pared down to only the most serious contenders.

Two venues -the Reno Air Races held yearly in September at the Reno Stead Airport in Reno,Nevada and the annual X Prize Cup in October - have been tapped for the Rocket Racing League's semi-finals and national championship contests, respectively, Diamandis added.

Individualcities, airport authorities or other entities can compete for the initial fouropen slots, league officials said. Letters of intent for new teams andprospective race courses are due by March 31, with written proposals due by May31, 2006, they added.

"This is anew age of flight...we've got one goal," Grantham said. "We're going to win, we'regoing to be champions."