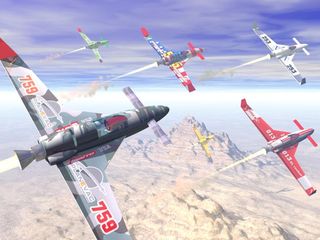 A privategroup of rocketeers has banded together to create theRocket Racing League with aims at blurring the line between competitive racingand human spaceflight. Their vision: A fleet of at least 10 stock rocket planesflown by crack pilots through a three-dimensional track 5,000 feet above theEarth.

"This iswhere innovation begins," said league co-founder PeterDiamandis, who unveiled the new rocket leaguehere today, in an interview. "It's all part of the same...mission, which is tomake space personally accessible to the public."

That finalshowdown will be held each year in Las Cruces New Mexico, which will host the first X Prize Cupexhibition on Oct. 9 to promote private spaceflight and X Prize contenders.Meanwhile, SpaceShipOne--the winning X Prize entry developed byaerospace veteran Burt Rutan and funded bymillionaire Paul Allen--has been donated to the Smithsonian's National Air and Space Museum in Washington, D.C. and will be unveiled on Oct. 5.

"I thinkthis is going to change the face of racing competitions," said rocket leagueco-founder and president Granger Whitelaw, who has spent 18 years in the autoracing field. "It's like a new [National Football League]."

The RocketRacing League will feature customizable X-Racer planes based on the EZ-Rocketdesign developed by Mojave, California's XCOR Aerospace, which will build the first generation of X-Racers. A prototypeX-Racer will be demonstrated at the upcoming X Prize Cup, league officialssaid.

Diamandis said the first rocket races, currently slated for October 2006, are expected tosee four X-Racer planes compete alongside one another, with the full 10-planegroup to follow in 2007. While the initial set of racers will be built for theleague, officials are actively searching for interested sponsors, teams andpilots, he added.

Like theEZ-Rocket, the prototype X-Racer features two, 400-pound thrust rocket enginesfueled by liquid oxygen and alcohol. A belly-mounted fuel tank carries just under three minutes' worth of fuel and allows a top speed of about 218 miles an hour (190 knots), said former shuttle astronaut Rick Searfoss, who serves as chief pilot for both XCOR and the Rocket Racing League.

The liquidoxygen/kerosene fuel mix is expected to have a burn time of about four minutes,which would force pilots to repeatedly shut down their engines and glide, then restart as needed to surpass opponents, explained Searfoss, who will demonstrate the method during theupcoming prototype demonstration.

Onboard heads-updisplays are also expected to project each pilot's "flight tunnel" or lane inorder to stay on course, league officials added.

Because oftheir fuel type, X-Racers should also generate a 20-foot flame easily visiblefrom the ground, which will be vital for spectators, Diamandis said.

"Imaginenot one, but 10 of these fire-breathing dragons flying around a race course,"he added.

Currentleague plans call for a Grand Prix-type competition in which X-Racers staggertheir takeoffs and fly side-by-side in lanes spaced a few hundred feet apart.Cockpit cameras, global positioning systems and even a planned "virtual X-Racerleague" - which league officials hope will allow video game fans to racealongside actual flyers during races - are on the drawing board to engagepublic interest in human spaceflight, league officials said.

"It's gotto be participatory," Diamandis said, adding that only by engaging the public - and more importantly young people - can a generalinterest in human spaceflight be supported. "It's about bringing 21stcentury racing into people's living rooms."