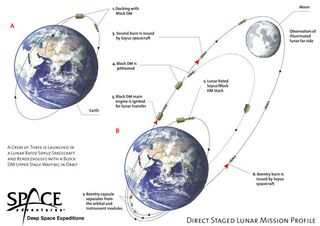 The Direct Stage profile is a nine-day mission with a three-day free flight in low Earth orbit and a five-and-one-half-day lunar flight segment.

NEWYORK--The company responsible for brokering the first two space tourist missionsto the International Space Station announced today plans for a mission thatwill send space tourists to the far side of the moon at the cost of $100million per person.

Deep SpaceExploration (DSE)-Alpha will be the first in a series of deep space missionsbeing planned by the Arlington, VA-based Space Adventures. The mission couldlaunch as early as 2008 and will be conducted in cooperation with the RussianFederal Space Agency (FSA) and the Russian space design bureau Energia.

The companyis best known for sending space tourists--Dennis Tito in 2001 and MarkShuttleworth in 2002--to the International Space Station (ISS) for $20 million.

Iflaunched, the mission will mark the first time humans have orbited the moon inmore than 30 years.

"It's beenfar too long," said Space Adventures CEO Eric Anderson. "It's time to go back."

The missionwill be flown by a Russian cosmonaut and will carry two commercial passengers. Oneof the prospective clients is Greg Olsen, the technology entrepreneur andmillionaire is scheduled to become the world's third space tourists thisOctober. Olsen booked his trip through Space Adventures.

Olsen, whoalso attended the press conference, said he was intrigued by the possibility oftraveling to the moon.

"Peoplehave been asking me if I'm going to do this," Olsen said. "My answer is thatI'm really interested but one flight at a time."

Livingconditions on the spacecraft will be tight, as the interior will have a volumeof approximately 350 cubic feet, about as large as the inside of a large SUV.

Like thecompany's previous orbital missions, DSE-alpha will rely upon the Soyuz TMAspacecraft, the latest incarnation of the Soyuz spacecrafts that have served asthe workhorses of the Russian space program since the 1960s.

Unlikeother Space Adventure missions, however, DSE-Alpha will also use an additionalpropulsion module known as the Block DM to provide the extra thrust required toreach the moon.

Andersonsaid that the five-fold price increase for the lunar mission over that ofprevious orbital mission is justified because it will require the launching oftwo spacecrafts instead of one.

Andersonalso pointed out that seats on the orbital flights to the ISS were part ofmissions already bought and paid for by the Russian government.

Finalmission details are still being worked out, but two scenarios are possible,Anderson said. One requires the crew to dock at the ISS for up to 14 daysbefore launching off on an approximate six-day flight to the moon.

In thesecond scenario, the ISS will not be used and the crew will orbit the Earth forapproximately three days before blasting off for the moon.

Andersontold SPACE.com that the decision of which scenario is ultimately usedwill depend on a variety of factors, including who will fly and the status ofISS when the first mission occurs.

Dependingon which scenario is used, the Soyuz rendezvous with the Block DM will eitheroccur at the ISS or in low earth orbit.

Andersonsaid that prior to the actual mission, a rigorous systems test will beconducted on both the Soyuz and Block DM would. Practice rendezvous' betweenthe two spacecrafts, as well as a unmanned lunar flight, are alsoplanned.

Andersonsaid his company has identified over 1000 individuals who have the financialresources to afford such a flight.

Sevastyanovtold SPACE.com that the Russian government is currently developingseveral lunar and deep space programs, including production of a reusablespaceplane dubbed "Kliper," as well as plans for a lunar settlement.

Askedwhether he expects Space Adventures to be involved in any of those plans,Sevastyanov said he had no objections.

"If theyare interested and have the wherewithal, they are very welcome," he said.