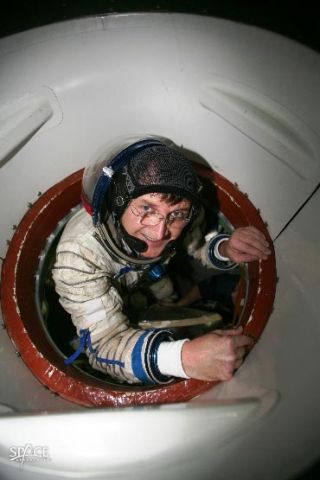 American entrepreneur Charles Simonyi peers out of the hatch of a Russian Soyuz spacecraft simulator during prelaunch training for his 13-day flight to the International Space Station.
(Image: © Space Adventures.)

Whenever former space tourist Charles Simonyi misses the sensation of orbital flight, he doesn't have to travel farther than to his local museum to bring the memories rushing back.

And whenever he misses his father, he can open up the physics history book his father wrote in Hungarian, which was recently translated into English for publication in the United States.

Simonyi recently lent the Seattle Museum of Flight the space capsule that carried him and two professional spaceflyers to the International Space Station in March 2009. The museum has installed the Soyuz TMA-14 capsule in its new Charles Simonyi Space Gallery.

"It was my home for a couple of days and it brings back very incredible memories," the Hungarian-American computer software billionaire said of the capsule, which he purchased after the flight.

Simonyi paid about $35 million to Russia's Federal Space Agency for the 13-day round trip. He was the fifth person to pay his way to space and the only one to go twice. Simonyi first flew to the space station aboard the Soyuz TMA-10 in April 2007.

Simonyi lives near Seattle, in Medina, Wash., when he is not on his world-traveling yacht, Skat. He donated $3 million toward the cost of the Museum of Flight's new space gallery. Simonyi told SPACE.com that the museum is "a wonderful facility and it has aircraft from all eras, from the very beginning up to Concorde and Air Force One and all kinds of flying machines.

"It's a fantastic family experience, and kids are always very enthusiastic and excited when they see things connected with flying in space." [Photos: The First Space Tourists]

In addition to his space-themed pursuits, Simonyi is busy promoting a book penned by his late father, a physicist and electrical engineer from Hungary.

Karolyi Simonyi published the first edition of "A Cultural History of Physics," written in Hungarian, in 1979. Now the book has been translated into English and has been published in the United States by CRC Press.

The book details the history of physics from the ancient Greeks to today. Charles Simonyi worked tirelessly for its publication and contributed an introduction to the text.

"It's an extraordinary book because it's written for everyone who is interested in culture either from the humanities side or from the science side," Simonyi said. "It's an incredible pleasure to be able to bring this jewel to the English-speaking world."

Karolyi Simonyi was a professor of electrical engineering in Budapest who lost his position for political reasons, his son said. In his newfound spare time he began writing the book.

"He had a fantastic library and he was very well read in all the humanities, and he always professed that culture is an integral whole; the humanities and the sciences are indivisible and they should be understood together," the younger Simonyi said. "So he took advantage of his difficult predicament and he started on this extraordinary work. Now it's been published in five editions in Hungary and has had tremendous success."

Simonyi said the book is coming to the United States at a good time, when technology is developing rapidly and everyone could use a bit more familiarity with science.

"I think science, of course, is very important for everyone to understand — if not the details of science, the role of science in society and how science relates to the rest of our lives and the rest of our pursuits," Simonyi said. "And what's the best way to learn about science and the connection between the humanities and sciences than through history?"

The tome includes original quotations from great thinkers throughout the ages, as well as some of the cultural flavor of the development of science. For example, one page includes some particularly biting comments by some of the greats of 17th-century physics, such as Kepler, Galileo, Newton and Descartes, about each other.

"Essentially it’s a little bit like People magazine, where personalities are gossiping about each other," Simonyi said. "Sometimes, of course, they say nice things about each other, but sometimes they are needling or worse."