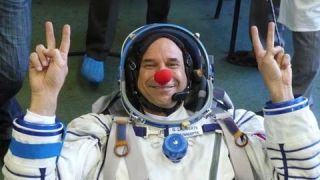 Now the Canadian artist and entrepreneur has published a book of gorgeous photos he took of the Earth from space during his 12-day trip to the International Space Station.

Laliberte paid a reported $35 million to Russia, through the U.S. firm Space Adventures, for a ride aboard a Russian Soyuz spacecraft. He devoted his mission to raising awareness about his charity, the One Drop Foundation, which is dedicated to water conservation.

The trip culminated in an event he staged on Oct. 9, 2009 to celebrate water through performances in 14 cities around the world, as well as from the International Space Station, called "Moving Stars and Earth for Water."

Proceeds from Laliberte's new book, Gaia (Assouline, June 2011), will go to the One Drop Foundation.[Gallery: Guy Laliberte's Photos of Earth From Space]

SPACE.com caught up with Laliberte this month at a book launch event at the Assouline store in New York's Plaza Hotel:

SPACE.com: When you took these photos, did you know you were going to publish them in a book?

Guy Laliberte: Actually not. It was really like when you go traveling, I was taking these pictures as a personal souvenir. When I came back on Earth, I start to share that with friends and family, I see the reaction, they said, "Wait a minute, there's something there."

Then I met Prosper Assouline [founder of Assouline Publishing], fell in love with each other, start to dream and think [of this] crazy project, and for me the result is fantastic. It became a tool to raise money for One Drop, because all my royalties and profit of the book goes to raise money for my foundation. And then hopefully this will be a tool that will touch people and make them look at the planet in a beautiful way.

SPACE.com: Do you have a favorite photograph?

Laliberte: It's very difficult, it's like my show. Everybody asks me, "Which is your favorite show?" They're all like little kids. But I have to admit there's one.

The last picture in the book, which is that little blue layer [between space and the dark Earth at sunrise]. This is a very specific moment, very difficult to achieve because it's a fraction of a second. So that one I was very happy.

SPACE.com: Were you happy with how your "Poetic social mission" went, and the impact you were able to make?

Laliberte: Yes, actually, in many aspects. The reach was great, the entire coverage of my mission and my preparation. We made a little study. We touched 600 million with the coverage. That was a great, great way of introducing and making One Drop known.

The experience, it was another artistic experience. Very challenging to orchestrate our first show from space, and 14 different cities, so it was a very big challenge. But in the end the feedback we had was very good.

SPACE.com: Did seeing water from that vantage point, above the Earth, change your feelings about water?

Laliberte: No, I already had my commitment to water when I went there. It just reconfirmed certain things: the beauty of it, and how badly we're treating water sometimes in certain parts of the planet.

SPACE.com: Why do you think it's important for artists and non-astronauts to go to space, as well as professionals?

Laliberte: Well, I think this is an amazing experience that I wish more people could experience, in terms of being able to look at this planet from a point of view that shows its beauty in such a great scale. It's very emotional, very touching. You don't have to be an artist to feel like that. Every cosmonaut or astronaut I met there always has said, "We all have that thing in common, there's the very deeply emotional feeling that you live when you're in space." [Earth From Space: Amazing Photos by Astronaut Ron Garan]

SPACE.com: Would you consider going back?

Laliberte: Anytime. Will I have time in the near future? I don't think so. I have a lot of busy projects, and actually I am not sure they'll be seats available very soon. Still, I keep my door open for an alien ship to come and pick me up and bring me farther, but that we'll see.