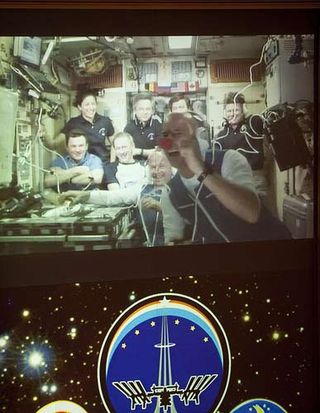 Canadian billionaire Guy Laliberte, an acrobat-turned-spacetourist, is getting used to floating in weightlessness on the InternationalSpace Station and said Tuesday that the trip was more than worth the multimillion-dollarprice tag.

?Yes, it?s worth every penny,? a smiling Laliberte toldreporters via a video link, adding that weightlessness has been a joy eventhough he did smack his head on the ceiling three times in one day. ?

Laliberte, the founder of the Cirque du Soleil, paid areported $35 million for his 12-day trip to space, arrivedat the orbital lab Friday. Since then he has been settling into his newhome 220 miles (354 km) above Earth and making friends with the other eightspaceflyers aboard the station.

His trip is not just a vacation, though. Laliberte hasplanned an ambitious performanceevent for Oct. 9 to communicate the importance of water conservation, anissue he campaigns for through the ONE DROP non-profit organization he started.

Laliberte plans to use all his circus-staging skills tocoordinate a simultaneous webcast featuring himself and other artistsbroadcasting from 14 cities around the world. He and the performers will recitea poetic story about water written by Canadian author Yann Martel.

In addition to preparing for the event, Laliberte has beenfamiliarizing himself with the space station and getting to know his crewmates.

"There's so much equipment here and it's veryimpressive and I just don?t want to knock any of those computers out," hesaid. "But day after day I get more comfortable. Plus I'm meeting somegreat people here. I'm spending the time to learn a little bit more about spaceexploration and I'm very fascinated about it."

For their part, the professional astronauts working at thestation seem to enjoy the company of a space clown.

"I don?t think that Guy Laliberte is here just forfun," said Belgian astronaut FrankDe Winne of the European Space Agency. "He's spreading a lot of awarenessthat water is a scarce resource. I think spaceflight for citizens in generalshould become more and more common. The more people that could travel to spaceand see also how vulnerable our planet could be the better it would be for ourentire planet. I encourage very much people like Guy Laliberte joining us onthese missions."

Laliberte launched on a Russian Soyuz spacecraft Sept. 30 ona trip booked with the Russian Federal Space Agency through the Americancompany Space Adventures, which has brokered seven previous tourist flights.Laliberte is set to return to Earth aboard a Soyuz Oct. 11.