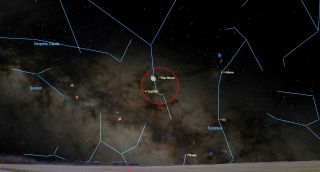 When the bright planet Jupiter rises in the southeastern sky at about 12:15 a.m. local time on Tuesday morning, April 23, it will be positioned 3 degrees to the lower left of the waning gibbous moon. The moon and planet will cross the sky together for the rest of the night, eventually moving to a point low in the southwestern pre-dawn sky. The duo will make a lovely photo opportunity when composed with an interesting foreground landscape.
(Image: © Starry Night software)

If you're up late in the coming nights, you may want to pay attention to the waning gibbous moon — for it will be visiting the two largest gas giants of our solar system early on Tuesday and Thursday mornings (April 23 and 25).

On Tuesday morning, the moon will sidle up to the largest planet in our solar system, giant Jupiter. Then, two mornings later, on Thursday, the moon will meet up with the ringed wonder of our planetary system, Saturn.

Moon and Jupiter (and Antares too)

Late on Monday night — or, more precisely, early Tuesday morning — at around 12:30 a.m. in your local time zone, look low toward the southeast horizon and you will see the rising moon. And located about 3 1/2 degrees to its lower left and shining brilliantly will be Jupiter. By around 4 a.m., both moon and planet will be almost due south. And because the moon moves against the starry background toward the east at about its own apparent diameter each hour, the gap between it and Jupiter will have shrunk noticeably, down to about 2 degrees.

If you have a telescope, this will be the best time to check out Jupiter: just prior to the break of dawn and when it appears at its highest above the southern horizon. The planet provides a feast of detail, especially in moderately large telescopes, and skywatchers can catch at least a few gray cloud belts (not to mention the four Galilean moons) even with small telescopes.

You might also look for another object this morning, shining with much less radiance than Jupiter, though more colorful (appearing distinctly reddish in hue). That will be Antares, the brightest star in the constellation of Scorpius, the scorpion. You'll find Antares sitting 15 degrees to the right of Jupiter. Your clenched fist held at arm's length measures roughly 10 degrees in width, so Antares will appear about one and a half fists to the right of Jupiter.

Two mornings later, on Thursday, if you can stay up until the last lonely hours before dawn, you'll again see the rising — albeit somewhat slimmer — moon low in the southeast at 2:30 a.m. And sitting about 4 degrees to its right will be a star-like object shining with a sedate, yellowish-white tint. That will be Saturn.

Jupiter, at a magnitude of -2.4, stands out like the proverbial sore thumb. By contrast Saturn, even when close to the bright moon, is about 15 times dimmer, at magnitude +0.5. (Higher magnitudes are less bright.) So, Saturn might not immediately call attention to itself, though it will be the brightest object in the moon's vicinity Thursday morning.

Like when viewing Jupiter, you should wait until 4 a.m. to check Saturn out with a telescope, though it will appear lower than Jupiter and so its image may appear a bit distorted due to atmospheric turbulence. The great ring system is tilted 23 1/2 degrees to our line of sight and can be glimpsed in small telescopes or high-powered binoculars with magnifications as low as 25 power.

Building toward a unique event

Right now, Jupiter and Saturn are separated by a rather wide 26 degrees in our sky, but over the next 20 months, this situation is going to dramatically change. Jupiter takes 11.86 years to revolve around the sun, while Saturn takes 29.35 years.

At roughly 20-year intervals, Jupiter and Saturn engage in a conjunction. Jupiter's faster motion around the sun allows it to overtake Saturn in our sky. The last time this happened was in May 2000, and late next year, it's going to happen again. Usually, when Jupiter and Saturn "meet," they approach to within a degree or two of each other. But their approach in 2020 will be nothing short of extraordinary.

In fact, on Dec. 21, 2020, Jupiter and Saturn will come to within 6 arc minutes, or 0.1 degrees, of each other. That's just one-fifth the apparent diameter of the moon. It will be by far the closest that these two planets have appeared to each other since the 17th century. They will be so close that if you use a telescope and employ a high-power eyepiece, you will be able to fit both Jupiter and Saturn in the same field of view!

We can only hope the weather will be clear that very special night. Mark your calendars!

Joe Rao serves as an instructor and guest lecturer at New York's Hayden Planetarium. He writes about astronomy for Natural History magazine, Farmers' Almanac and other publications, and he is also an on-camera meteorologist for Verizon FiOS1 News in New York's lower Hudson Valley. Follow us on Twitter @Spacedotcom and on Facebook.