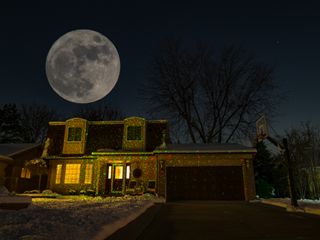 A supermoon happens when the full moon coincides with the moon's closest approach to Earth in its orbit. Supermoons make the moon appear a little brighter and closer than normal, although the difference is hard to spot with the naked eye.

The term "supermoon" has only been used in the past 40 years, but it received a slew of attention in late 2016 when three supermoons occurred in a row. The supermoon of November 2016 was also the closest supermoon in 69 years, although a closer supermoon will rise in the 2030s.

How a supermoon happens

The moon's orbit around the Earth is not a perfect circle. It has an average distance of 238,000 miles (382,900 km) from Earth, but its apogee and perigee — the closest and farthest approaches from Earth — change every lunar month.

"The main reason why the orbit of the moon is not a perfect circle is that there are a lot of tidal, or gravitational, forces that are pulling on the moon," said NASA's Noah Petro, deputy scientist of the Lunar Reconnaissance Orbiter mission, in a 2016 Space.com interview.

He added that the different gravities of the Earth, sun and planets all have an effect on the moon's orbit. "You have all of these different gravitational forces pulling and pushing on the moon, which gives us opportunities to have these close passes."

A supermoon needs two key ingredients to occur. The moon needs to be at its closest approach, or perigee, to the Earth in its 27-day orbit. The moon also needs to be at the full phase, which happens every 29.5 days when the sun fully illuminates the moon. Supermoons only happen a few times a year (at most) because the moon's orbit changes orientation while the Earth orbits the sun — that's why you don't see a supermoon every month.

The moon will appear as much as 30 percent brighter and 14 percent larger than usual, but it's very hard to spot the difference with the naked eye. "That's not enough to notice unless you're a very careful moon-watcher," Sky & Telescope magazine senior editor Alan MacRobert said in a 2016 statement.

The supermoon may look especially large to you, however, if it's very close to the horizon. But that has nothing to do with astronomy and everything to do with how the human brain works. This effect is called the "moon illusion" and may arise from at least a couple of different things. Scientists suggest that perhaps the brain is comparing the moon to nearby buildings or objects, or perhaps our brain is just wired to process things on the horizon as bigger than things in the sky.

The term "supermoon" didn't originate in astronomy, but in astrology — a pseudoscientific tradition that studies the movements of celestial objects to make predictions about human behavior and events. The term was first mentioned in a 1979 article for Dell Horoscope magazine by Richard Nolle, according to Astronomy.com. Nolle defined a supermoon as "a new or full moon which occurs with the moon at or near (within 90 percent of) its closest approach to Earth in a given orbit", without explaining where he obtained the 90 percent figure.

But it wasn't until the last few years that the term received more attention. A search on Google Trends reveals that starting from 2004, the word "supermoon" was not used often until at least 2011. Interest in the supermoon hit a high in November 2016, when Earth experienced the largest supermoon in 69 years. Further, the term appears to be more popular in certain areas of the world — principally Southeast Asia and North America — with some lesser interest in places such as Europe or India.

Recent astronomical terms such as "supermoon" or "black moon" (the second new moon in a month) could create a perception of "false events" among the public, Cincinatti Observatory outreach astronomer Dean Regas told Space.com in 2016. But Regas, who also co-hosts the PBS program "Star Gazers," said the "supermoon" term is a great public outreach term for astronomy that could have other benefits beyond the event itself.

"It's a great way to get the public interested," he said of the supermoon. "It's something that they can relate to and they can go out and actually see."

On Jan. 20-21, 2019, the supermoon coincided with a lunar eclipse. Lunar eclipses occur when the Earth is exactly between the sun and the moon. The moon shines brown-red because the only light it receives is reflected from Earth.

The end of 2016 saw three supermoons in a row in October, November and December. But it was the Nov. 14 one that got the most attention because it was the closest supermoon in recent memory. The moon's perigee was 221,524 miles (356,508 kilometers) from Earth, making it the closest full moon to Earth in 69 years — specifically, since the supermoon of Jan. 26, 1948.

An even closer full moon took place in January 1912; it was roughly 100 kilometers nearer to Earth than in November 2016. But skywatchers who are around in November 2034 will get a special treat, as that moon will be even closer than both the 1912 and 2016 moons.