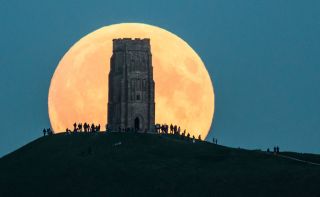 The "supermoon" of Nov. 14 — dubbed the "Beaver Moon" because it falls at a time of year when American settlers trapped beavers ahead of the winter — will be the biggest full moon observers have seen in the sky since 1948.

A supermoon results when the moon reaches its full phase at the closest point to Earth along the satellite's elliptical orbit, causing the object to look somewhat bigger and brighter in the sky than usual. The Slooh Community Observatory will offer a live broadcast for November's full moon on Nov. 13 at 8 p.m. EST (0100 GMT on Nov. 14). You can also watch the supermoon live on Space.com, courtesy of Slooh. [Closest Supermoon Since 1948: When, Where & How to See It]

Here are five surprising facts about the Nov. 14 supermoon:

While the moon will look 15 percent bigger and 16 percent brighter than a typical full moon, the average amateur astronomer won't see much of a difference. "That's not enough to notice unless you're a very careful moon-watcher," Sky & Telescope magazine senior editor Alan MacRobert said in a statement.

Sky & Telescope suggests setting up a scale-model experiment to illustrate the difference. Use a standard 12-inch (30 centimeters) globe for the Earth and a baseball or orange for the moon. Place the simulated Earth and moon about 30 feet (9 meters) apart. Then, stand next to your "Earth" to see how big the "moon" is. The supermoon configuration would have the two objects roughly 28 feet (8.5 m) apart. If you repeat the experiment at 28 feet, you'll see only a very small difference.

It is possible that the moon will look extra-large to you if you see it near the horizon. This is a well-known effect called the "moon illusion." Scientists suggest it may result because viewers can easily compare the moon to nearby buildings, or because human brains just process objects on the horizon as larger than objects of similar size high in the sky.

2) Tides will be a little higher

Those who live near the ocean will experience tides that are slightly larger than usual. Such "spring tides" occur when the moon is at new or full phase. That's because, at these times, the Earth, moon and sun are all aligned with each other, and the gravitational tugs of the latter two objects act in concert on Earth's oceans.

Sky & Telescope suggests that the tides will be about 2 inches (5 cm) higher on Nov. 14 due to the presence of the supermoon.

"The largest difference occurs in certain areas of the Alaska coast, where the range of the tide may be increased by around 6 inches [15 cm]," officials with the U.S. National Oceanic and Atmospheric Administration's National Ocean Service wrote in a spring-tide explainer. "But considering that these areas have an average tidal range of more than 30 feet [9 m], the increase is but a small percentage of the whole (less than a 2 percent increase)."

3) November's supermoon is the middle of a trio

While the moon is pretty to look at it in its full phase, it can be frustrating for skywatchers who want to examine craters, which are better defined in a telescope or binoculars when there are shadows on the moon. The bright glare of full moons also makes it difficult or impossible to look for fainter objects, such as nebulae, galaxies or meteors.

"The supermoon of Dec. 14 is remarkable for a different reason," NASA officials said in a statement. "It's going to wipe out the view of the Geminid meteor shower. Bright moonlight will reduce the visibility of faint meteors five- to 10-fold, transforming the usually fantastic Geminids into an astronomical footnote. Skywatchers will be lucky to see a dozen Geminids per hour when the shower peaks."

4) November's supermoon will be historically bright

Even if you've seen supermoons before, it's worth taking note of the one on Nov. 14. As pointed out above, this is the brightest supermoon since 1948. NASA said the next full moon that will look this big won't occur until Nov. 25, 2034.

Fortunately, the moon is very easy to spot in the sky. The full moon is also in the sky all night at most locations around the world. But to see the natural satellite in all its glory on Nov. 14, pick an area with a low enough horizon to spot the moon. Details will be enhanced in a telescope or binoculars if you find a region with low light pollution.

5) Full moons are aligned with the Earth and sun, but not exactly

Full moons occur when the sun, Earth and moon are all in a line, with Earth in the middle. But the geometry is not perfect; Earth does not block the sun's light from bathing the moon's face.

A perfect alignment does happen every once in a while, and the result is a total lunar eclipse. No total lunar eclipses will happen in 2017, but skywatchers across much of the U.S. will be treated to a total or partial solar eclipse on Aug. 21, 2017.

Editor's note: If you snap an awesome photo of the moon that you'd like to share with Space.com and our news partners for a potential story or gallery, send images and comments to managing editor Tariq Malik at spacephotos@space.com.