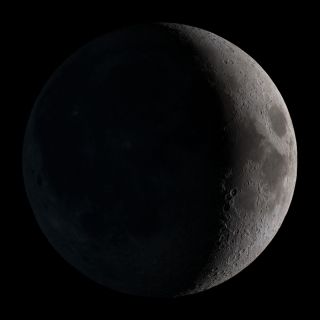 Earth's moon during a waxing crescent phase. When the moon's Earth-facing side is entirely in shadow, it is known as a new moon.
(Image: © NASA/Goddard Space Flight Center Scientific Visualization Studio)

Even though it will be nearly invisible to skywatchers, a rare Black Moon will be in North American skies today (Sept. 30).

A Black Moon is a newer term that refers to the second new moon in a month. The moon goes through regular phases because of its changing alignment with the Earth and the sun. The new moon phase occurs when the sun is completely illuminating the far side of the moon, making the Earth-facing side completely dark and nearly impossible to see.

But just like the term Blue Moon — which refers to the second full moon in a month — the term Black Moon has no scientific significance, at least not usually. The exception is when the new moon blocks the disk of the sun in the sky, producing a solar eclipse. [Black Moon 2016: What It Is & Why You Can't See It]

The fact that humans know about the phases of the moon, including the invisible new moon, "shows off how smart we are," Dean Regas, an outreach astronomer for the Cincinnati Observatory who also co-hosts the PBS program "Star Gazers," told Space.com. " Even though we can't see it, we know it's there."

Regas added that the proliferation of new terms about moons in the past few years — such as Black Moon and super moon — produces mixed feelings in him, because there's a danger of creating false events that don't have any significant astronomical significance. But he says he was"won over" by the super moon concept, which refers to a full moon that takes place when the moon is at its closest point to Earth in the year.

"It's a great way to get the public interested," he said of the super moon. "It's something that they can relate to and they can go out and actually see."

While the new moon doesn't produce a spectacular sight in the night sky, the fact that the moon is not lit at all is a boon for stargazers. The moon's light, especially after it reaches the half-full stage, can interfere with observations of fainter objects in the sky, like distant stars and galaxies.

One example of an excellent "new moon" activity is trying to observe an occultation, which occurs when the moon passes on top of another celestial object from the perspective of Earth. These occultations are tricky to find, and are often only visible over a small geographic area.

"Sometimes there will be an event where there's a bright star, or a cluster of stars, or a planet, or something. The moon happens to block them out," Colin Haig, director of the Royal Astronomical Society of Canada (RASC), told Space.com.

Haig advised using a publication such as the RASC's Observer's Handbook to search for occultation locations. A full list of lunar occultations is also available at the International Occultation Timing Association.

If an occultation isn't happening in your area at a particular time, of course there are plenty of other things observers can look at, he said. Get as far away from light pollution as possible, and use a pair of binoculars or a telescope and look for galaxies or nebulas. In late September, thenorthern hemisphere is still facing the brightest part of the Milky Way galaxy, providing a wealth of objects for people to look at.

"The new moon is of course the best time to take a trip to see a dark sky," Tony Cook, the astronomical observer at the Griffith Observatory near light-polluted Los Angeles, told Space.com. He estimates that the city lights have increased ambient brightness by two to three times since 1987, when he took a picture of the night sky that shows faint objects that are invisible today.

"At the phase of new moon, the moon is near the sun in the sky, so it rises and sets with the sun and therefore is not visible at night at all," he added. "It makes for the best natural viewing conditions to see faint objects."

Slooh Community Observatory will host a webcast Monday, Oct. 3 at 3 p.m. EDT (1900 GMT) to show live views of the young moon, viewable on their website and also on Space.com. The webcast will feature discussion with special guests including Slooh's spiritual correspondent Helen Avery, who will discuss the Black Moon's significance to pagan religion, and there will also be a discussion of how to define the Black Moon when dealing with multiple time zones.