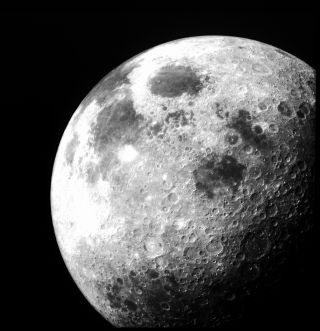 The moon, imaged from the Apollo 12 command module.
(Image: © NASA)

Black Moon, Blue Moon, blood moon, supermoon — what's the difference between all these moon types? We have a quick guide below to help you distinguish moon from moon.

Bear in mind that, in most cases, the nicknames given to different moon events do not have large astronomical significance. In most cases, the names refer to some connection between the position or phase of the moon and the Gregorian calendar.

"I emphasize [that] these are not science terms at all; they are not used by astronomers," Bob Berman, an astronomer for the space broadcasting service Slooh, said in an interview with Space.com. He said most of these terms are less than two decades old and are used primarily by the general public. [Black Moon 2016: What It Is & Why You Can't See It]

A Black Moon has multiple meanings. One commonly used definition is the second new moon in a month. The moon goes through several phases that skywatchers can see from Earth. During a full moon, the entire disc is visible. During a new moon, none of the disc is visible because the far side of the moon is lit by the sun, leaving the Earth-facing side in shadow.

According to Space.com skywatching columnist Joe Rao, Black Moons (under this definition) occur about every 32 months. The next Black Moon in North America will be Friday, Sept. 30.

Berman added that there are other definitions of a Black Moon. One refers to a situation in which there are no new moons in an entire month. This is only possible during the month of February, which normally has 28 days. Because a lunar cycle is 29.5 days, it's possible for February to miss either a full moon or a new moon.

An even lesser-known definition for the Black Moon is the third new moon in a season of four moons. Berman said he is not sure where this definition originated.

Sometimes, the third full moon in a season is also called a Blue Moon, which may be a partial explanation for one of the definitions of the Black Moon, Berman said. The term "Blue Moon" originated in the 1940s but didn't become widely used until a few decades ago, he said.

The so-called blood moon happens during a total lunar eclipse. At that time, the Earth passes in between the sun and the moon, and blocks the sun's light from falling directly onto the moon. Instead, the moon receives a little light from the edges of Earth's atmosphere, which turns the light (and the moon's surface) red. Skywatchers who have witnessed a total lunar eclipse will understand why it is called the blood moon.

A so-called supermoon occurs when the moon is full and at its closest point to Earth. Although this increased proximity makes the moon appear slightly larger in the sky, the change is so slight that most skywatchers won't notice the difference. On Nov. 14, 2016, the supermoon will be extra-special, according to Rao.

"The last time the moon came this close was on Jan. 26, 1948," he added. "Expect a large range in ocean tides (exceptionally low to exceptionally high) for the next few days."

Various cultures also attribute different names to the full moons of every month. For example, Native American tribes and other groups of people in the Northern Hemisphere named the November full moon the Beaver Moon and the Frosty Moon, both of which refer to the local wildlife and changing seasons. To see a full list from 2016, consult this article by Rao.