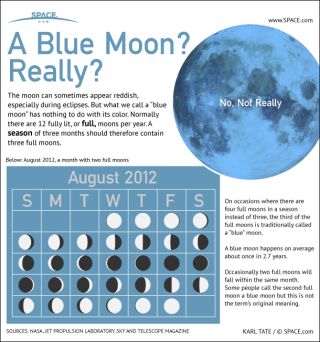 Thought to be called "blue" after an old english term meaning "betrayer," a Blue Moon is an extra new moon that occurs due to a quirk of the calendar.
(Image: © Karl Tate, SPACE.com)

The moon can sometimes appear reddish, especially during eclipses. But what we call a "Blue Moon" has nothing to do with its color. Normally there are 12 fully lit, or full, moons per year. A season of three months should therefore contain three full moons.

Thought to be called "blue" after an old English term meaning "betrayer," a Blue Moon is an extra full moon that occurs in that span, due to a quirk of the calendar.

On occasions where there are four full moons in a season instead of three, the third of the full moons is traditionally called a Blue Moon. A Blue Moon happens on average about once every 2.7 years.

Occasionally two full moons will fall within the same month. The second full moon is also often called a Blue Moon, but this is not the term's original meaning.

The moon can actually appear blue under certain circumstances, such as when ash is present in the atmosphere from fires or volcanic eruptions. This type of Blue Moon cannot be predicted in advance, however.