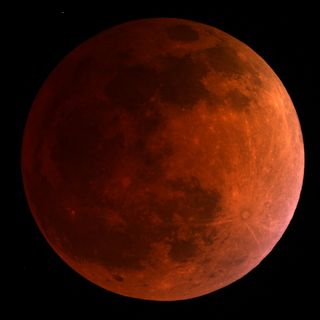 On Sunday (Sept. 27), skywatchers across the United States will be in for a special treat: The full "supermoon" (a full moon when the moon is closest to Earth in its orbit) will go into eclipse. A lunar eclipse occurs when the moon passes into the shadow of the Earth.

There are several "flavors" of eclipse. A penumbral eclipse happens when the moon just grazes the thinnest part of Earth's shadow. If the moon partly goes into the shadow, observers see a partial eclipse. A total lunar eclipse is the most spectacular of the three: The moon goes fully into the shadow and appears either red or brown.

Sometimes an eclipse moon is called a "blood moon" because of this rusty color. But why does the moon turn red, and not simply darken to black when it goes into the shadow? As NASA explains, it's because the Earth's atmosphere extends beyond the planet, and sunlight passes through it, still reaching the moon. [Supermoon Lunar Eclipse 2015: Complete Viewing Guide]

The moon turns different shades of red, orange or gold with each eclipse. That's because the shade of the light reaching the moon depends on what is in Earth's atmosphere (the amount of water and particles), as well as the atmosphere's temperature and humidity, NASA wrote. For example, a recent volcanic eruption could send more particulates into the atmosphere, further darkening the moon during an eclipse.

Editor's Note: If you snap an amazing picture of the Sept. 27 total lunar eclipse and want to be featured in a story or gallery, you can send photos, comments, and your name and location to managing editor Tariq Malik at spacephotos@space.com.