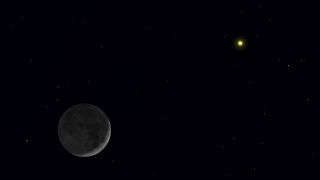 Saturn will be in conjunction with the moon on Nov. 29, at 4:03 p.m. EST (2103 GMT). The pair will be visible above the southwest horizon shortly after sunset.
(Image: © SkySafari App)

If the weather is clear in your area on Black Friday (Nov. 29), you will have an opportunity to see two of the most popular objects to look at through a telescope: the moon and Saturn.

It will soon be time to bid a fond adieu to the showpiece of the solar system, the magnificent ringed planet Saturn. In about a month, Saturn will begin to disappear into the sunset fires. And Friday will bring one of the final opportunities for many skywatchers to make a positive identification of the ringed planet, as it will appear close to the waxing crescent moon.

To spot Saturn, wait until about 45 minutes after the sun has gone down, and then concentrate your gaze toward the southwest horizon.

The moon will be a bit more than three days past new phase, 12% illuminated, and will be hovering nearly 20 degrees above the horizon. Your clenched fist held at arm's length measures roughly 10 degrees in width, so that lunar arc will appear almost two fists up. Take note of a solitary bright "star" — shining with a sedate, yellowish-white tint — to the upper right of the moon. That will be the solar system's version of the "lord of the rings."

Before you attempt to make this sighting, ensure there are no tall trees or buildings to obstruct your view of these two celestial bodies. After all, both will be lowering rapidly as the sky darkens, and both will remain in view for about another 2 hours and 15 minutes more before disappearing below the horizon.

You can only see Saturn's famous rings with a telescope, though some observers might catch a glimpse using steadied (or image-stabilized) high-powered binoculars or small spotting scopes. But to get a definitive view, you'll need an eyepiece with a magnification of at least 30 power. Larger instruments will provide more pleasing images. Through a 6-inch (15 centimeters) telescope at 150 power, the view is quite dramatic; with an 8-inch (20 cm) telescope at 200 power, the sight is even more stunning.

But get your views in as soon as possible, as Earth's atmosphere is much more turbulent near the horizon. So, as Saturn descends in the southwest sky, its image will appear to "boil," or become somewhat distorted.

After leaving Saturn's vicinity, the moon will head on an easterly course against the background stars and will be pretty much by itself, with no planets nearby.

For telescope owners, the moon is perhaps the most interesting of all sky objects, because it's close enough to be seen in great detail. Even a simple pair of 7-power binoculars will show definite features on the lunar surface. Check the area around the line that separates light and dark (called the "terminator"), and you'll see craters and other lunar features stand out in bold relief because they're partially in shadow.

With each passing night, more of the lunar surface will become illuminated, and the crescent will gradually widen. It will arrive at "first-quarter phase on Dec. 4, with the full moon occurring on Dec. 12.