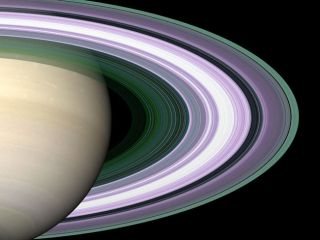 Saturn’s famous rings are spectacular. The most recently discovered ring is at least 200 times the diameter of the planet and could fit one billion Earths.
(Image: © NASA/JPL)

Saturn is the sixth planet from the sun and the second-largest planet in the solar system. It's the farthest planet from Earth that's visible to the naked human eye, but the planet's most outstanding features — its rings — are better viewed through a telescope. Although the other gas giants in the solar system — Jupiter, Uranus and Neptune —  also have rings, Saturn's rings are particularly prominent, earning it the nickname the "Ringed Planet."

Saturn is a gas giant made up mostly of hydrogen and helium. Saturn's volume is greater than 760 Earths, and it is the second most massive planet in the solar system, about 95 times Earth's mass. The Ringed Planet is the least dense of all the planets, and is the only one less dense than water. If there were a bathtub big enough to hold it, Saturn would float.

The yellow and gold bands seen in Saturn's atmosphere are the result of superfast winds in the upper atmosphere, which can reach up to 1,100 mph (1,800 km/h) around its equator, combined with heat rising from the planet's interior. Saturn rotates about once every 10.5 hours. The planet's high-speed spin causes Saturn to bulge at its equator and flatten at its poles. The planet is around 75,000 miles (120,000 kilometers) across at its equator, and 68,000 miles (109,000 km) from pole to pole.

Galileo Galilei was the first to see Saturn's rings in 1610, although from his telescope the rings looked more like handles or arms. Forty five years later, in 1655, Dutch astronomer Christiaan Huygens, who had a more powerful telescope, later proposed that Saturn had a thin, flat ring.

As scientists developed better instruments, they continued to learn more about the structure and composition of the rings. Saturn actually has many rings made of billions of particles of ice and rock, ranging in size from a grain of sugar to the size of a house. The particles are believed to be debris left over from comets, asteroids or shattered moons. A 2016 study also suggested the rings may be the carcasses of dwarf planets.

The largest ring spans 7,000 times the diameter of the planet. The main rings are typically only about 30 feet (9 meters) thick, but the Cassini-Huygens spacecraft revealed vertical formations in some of the rings, with particles piling up in bumps and ridges more than 2 miles (3 km) high.

The rings are named alphabetically in the order they were discovered. The main rings, working out from the planet, are known as C, B and A. The innermost is the extremely faint D ring, while the outermost to date, revealed in 2009, is so big that it could fit a billion Earths within it. The Cassini Division, a gap some 2,920 miles (4,700 km) wide, separates rings B and A.

Mysterious spokes have been seen in Saturn's rings, which appear to form and disperse within only a few hours. Scientists have conjectured that these spokes might be composed of electrically charged sheets of dust-size particles created by small meteors impacting the rings, or by electron beams from the planet's lightning.

Saturn's F Ring also has a curious braided appearance. The ring is composed of several narrower rings, and bends, kinks and bright clumps in them can give the illusion that these strands are braided. Impacts from asteroids and comets have also altered the appearance of the rings.

Late in its mission, the Cassini spacecraft traveled closer to the rings than any other spacecraft. The probe collected data that is still being analyzed, but it has already provided insights about the colors of some of Saturn's moons. In the gaps between the rings, the probe found unusually complex chemicals in the "ring rain" of debris falling from the rings into the atmosphere, and made new measurements of the planet's magnetic field, which produces a powerful electron current.

Saturn has at least 62 moons. The largest, Titan, is slightly larger than Mercury, and is the second-largest moon in the solar system behind Jupiter's moon Ganymede. (Earth's moon is the fifth largest.)

Some of the moons have extreme features. Pan and Atlas are shaped like flying saucers; Iapetus has one side as bright as snow and one side as dark as coal. Enceladus shows evidence of "ice volcanism": a hidden ocean spews out water and other chemicals from the 101 geysers spotted at the moon's southern pole. A number of these satellites, such as Prometheus and Pandora, are referred to as shepherd moons because they interact with ring material and keep the rings in their orbits.

Though scientists have identified many moons, Saturn has other small moons constantly being created and destroyed.

Saturn's impact on the solar system

As the most massive planet in the solar system after Jupiter, the pull of Saturn's gravity has helped shape the fate of our solar system. It may have helped violently hurl Neptune and Uranus outward. Along with Jupiter, it might also have slung a barrage of debris toward the inner planets early in the system's history.

Scientists are still learning about how gas giants form, and run models on early solar system formation to understand the role that Jupiter, Saturn and other planets play in our solar system. A 2017 study suggests that Saturn, more so than Jupiter, steers dangerous asteroids away from Earth.

The first spacecraft to reach Saturn was Pioneer 11 in 1979, flying within 13,700 miles (22,000 km) of the Ringed Planet. Images from the spacecraft allowed astronomers to discover two of the planet's outer rings, as well as the presence of a strong magnetic field. The Voyager spacecraft helped astronomers discover that the planet's rings are made up of thinner ringlets. The craft also sent back data that led to the discovery of three of Saturn’s moons.

The Cassini spacecraft, a Saturn orbiter, was the largest interplanetary spacecraft ever built. The two-story-tall probe weighed 6 tons (5.4 metric tons). It helped identify plumes on the icy moon Enceladus, and carried the Huygens probe, which plunged through Titan's atmosphere to successfully land on its surface.

After a decade of observation, Cassini returned incredible data about the Ringed Planet and its moons, as well as a photo re-creating the original "Pale Blue Dot" image, which captures Earth from behind Saturn, in 2013. The mission concluded in September 2017 when Cassini, low on fuel, was deliberately crashed into Saturn to avoid the slight chance of the craft crashing into and contaminating a habitable moon.

While there are no future missions planned for Saturn, scientists have proposed missions to probe the icy moon Enceladus or Titan. These explorations could involve submarines or modified rovers.

This article was updated on May 13, 2019 by Space.com contributor Greg Uyeno.