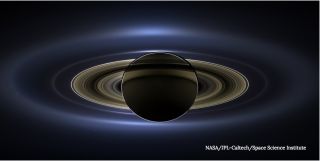 Jupiter may not be the "planetary shield" that many scientists make the gas giant out to be. Instead, new simulations suggest ;that Saturn may play a crucial role in steering asteroids away from Earth.

The "Jupiter as a shield" concept arose from a misinterpretation of a 1994 paper by George Wetherill — a planetary scientist at the Carnegie Institution who died in 2006 — says planetary scientist Kevin Grazier. Wetherill's paper argued that systems with "failed Jupiters" (that is, star systems only with planets of perhaps Uranus and Neptune's size or smaller) would have more densely populated cometary source regions, and that they "eject a smaller number of comets into interstellar space."

Grazier, of NASA's Jet Propulsion Laboratory who has also served as an advisor for "Battlestar: Galactica" and "Gravity," told Seeker that he tried to replicate Wetherill's work from 1994. The aim was to see what had changed with the more advanced computing power of today.

"You see [Jupiter's influence] recreated all the time in documentary TV shows," Grazier said. He reasoned that Saturn is a large planet, too. "I just thought about that [theory] and I said, 'I don't believe that for a moment.'"

Grazier found that, through simulations, a typical small body — like an asteroid or comet — between Jupiter and Saturn will get kicked out, but many of them are ejected after they pass into the inner solar system. Further simulations (some dropping Jupiter from the equations, and some dropping Saturn) show that it takes both planets combined to reliably move objects out of the solar system. If only one planet of the two exists, a belt of material is created and only a few small bodies are removed from the solar system.

The study, which has been published in the journal Astrobiology, also found that Jupiter's influence is more crucial when it comes to depositing volatiles on inner solar system planets, such as Earth. "Volatiles" are compounds with low boiling points, such as water. It was found that Jupiter's gravity slows down the passages of asteroids and comets through the inner solar system, making it more likely that material from these small bodies would accumulate on Earth and other locations.

Water is believed to have come from comets and asteroids, but the actual source of Earth's water is still poorly understood. For example, studies of Comet 67P/Churyumov-Gerasimenko by the Rosetta spacecraft showed that the water ice on the comet has a different composition than what is found in Earth's oceans. This means comets of Rosetta's type may not have been responsible for Earth's water.

Grazier's study therefore argues that Jupiter's role in the solar system is less of a shield, and more as a bringer of water and other "life-enabling volatiles" to the terrestrial planets and that Saturn has a far bigger role to play when deflecting asteroids and comets.

WATCH VIDEO: Did The Sun Steal Planet Nine From Another Solar System?