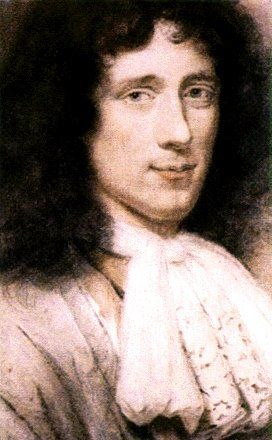 Christiaan Huygens was a Dutch scientist born in 1629. He proposed Saturn was a ringed planet, and was the first to propose a theory of light's nature.
(Image: © Portrait by Bernard Vailant)

Dutch scientist Christiaan Huygens not only proposed the earliest theory about the nature of light, he also put optics to good use when he turned a telescope toward Saturn and observed that its odd blob-like shape — Galileo had first seen the shape in a telescope and drew it in his notebook as something like ears on the planet — was in fact caused by rings. Working as an astronomer, physicist, mathematician and inventor, Huygens made a number of important contributions to science. [See also our overview of Famous Astronomers and great scientists from many fields who have worked in astronomy.]

Born at the Hague in the Netherlands in 1629, Huygens was the child of an important family. He studied at home under private tutors and, through his father, interacted with prominent visitors such as French philosopher and mathematician RenéDescartes. He studied law and mathematics at the University of Leiden, and then at the College of Orange at Breda.

In 1663, he was elected a member of the Royal Society, a newly formed scientific academy (which is still in existence today) aimed at improving the knowledge of science. Huygens was a contemporary of fellow member Sir Isaac Newton, whose research he respected although he at times disagreed with the prominent physicist.

Early publications by Huygens focused on mathematical problems, but in 1654 he turned his attention to the telescope. With the help of his brother, he came up with a better method of grinding and polishing the lenses, providing greater clarity. He turned one of his improved telescopes toward the planet Saturn, which had shown an elongated appearance in less accurate observations. Huygens determined that the distorted planet boasted several rings. Although his finding was initially not well received, further observations confirmed Saturn was indeed a ringed planet.

Huygens also discovered a large moon orbiting the planet, which he named Titan. When the European Space Agency parachuted a probe onto the moon in 2005 to study its atmosphere, they named it after the Dutch astronomer. Titan is considered one of the best possible sources for life in the solar system. Fittingly, Huygens wrote one of the earliest discussions on extraterrestial life, published just after his death.

Huygens also focused on light and its mechanics. In the 17th century, three theories about how light functioned existed in various stages. The first suggested that the eye sent out something which registered the world around it. The second proposed that objects emitted something which hit the eye. The third advocated that a medium between the eye and the environment around it changed between the object and the eye, allowing for sight.

Based on the third theory, Huygens proposed that light traveled in waves through a rare substance called luminiferous ether. The waves of light allegedly vibrated the ether as they traveled from the object to the eye. With this as his foundation, Huygens calculated the laws of reflection and refraction. Although his calculations remain correct, the ether itself does not exist.

His theory was rejected by Isaac Newton, who proposed that light was composed of several small bodies moving. Today, light is understood to have attributes of both waves and particles.

Huygens contributed to the understanding of mechanics when he determined that collisions between bodies neither lose nor gain momentum within the system. A single object may transfer its momentum to another object in a collision. He proposed that the an object's center of gravity moves in a straight line, and calculated the formula for centrifugal force, the outward-pushing force on a rotating body.

Huygens also invented the first pendulum clock, with an error of less than one minute a day. He went on to refine his clock, ultimately limiting errors to less than ten seconds over twenty-four hours. Galileo had initially designed such a clock at the end of his lifetime, but never actually constructed it. Huygens also reconstructed the components of wrist watches, improving their timekeeping and making them less bulky.

Other inventions by Huygens included his design of an internal combustion engine in 1680 that ran off of gunpowder, although he never actually built it. He developed the first compound eyepiece for a telescope using multiple lenses, which bore his name. These eyepieces were considered standard equipment for large telescopes for some time. Huygens also built three telescopes with focal lengths of 123 feet, 180 feet, and 210 feet, which were later presented to the Royal Society.