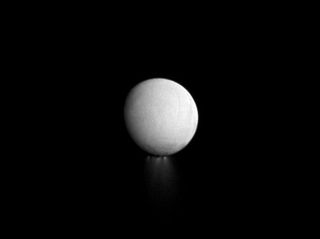 Saturn's moon Enceladus, with a diameter of 314 miles (505 kilometers), is small enough to fit inside the borders of the state of Arizona. This tiny satellite is one of the most promising potential sites for hosting life in the solar system. Despite its frigid temperatures, the moon hosts liquid water beneath its surface that appears to directly contact the rocky seafloor, making complex chemical reactions possible — such as those reactions that lead to life.

When Sir William Herschel turned his 1.2-meter telescope toward the sky for its first observation on Aug. 28, 1789, the new instrument proved its worth by aiding him in the discovery of a new moon around the ringed planet, Saturn. Enceladus would be the first of two moons discovered by Herschel, and the sixth moon found orbiting Saturn.

The diminutive size of the moon helped shield it from discovery. Enceladus orbits an average of only 147,909 miles (238,037 km) around the ringed planet. Although it is one of the brightest objects in the solar system, the glare from Saturn and its rings outshine the tiny satellite, requiring a telescope with a larger mirror to be seen. Herschel's observations coincided with the equinox of Saturn, when Earth's perspective on the planet resulted in reduced glare from the rings; it helped that he was using the largest telescope in the world to observe. [Photos: Enceladus, Saturn's Cold, Bright Moon]

Like the other moons of Saturn, Enceladus went nameless for years. Until Herschel's son, John, published a work in 1847 suggesting that the satellites be named after the Titans, the moons were given numerical names based on their distance from the planet. Before 1847, Enceladus was known as Saturn II.

In Greek mythology, the Titans followed the Greek god Cronus (known to the Romans as Saturn). Enceladus had snake-like limbs. During the battle between the Titans and the Olympian gods, the goddess Athena wounded him with a hurled spear. The Titan was buried on the island of Sicily, under Mount Etna. The injured Titan received the blame for the earthquakes and volcanic fires that erupted from the mountain.

Features on the moon are named for characters and places from the collection of West and South Asian stories known as "One Thousand and One Arabian Nights."

Enceladus has at least five different types of terrain on its surface. Craters mar the landscape, reaching sizes no larger than 22 miles (35 km) across. Other regions are smooth and free from signs of impact, indicating recent resurfacing. Plains, fissures, and breaks in the crust also fill the surface.

Although small, the moon shines brightly. Its icy surface reflects more than 90 percent of the sunlight that falls on it, making it one of the brightest objects in the solar system. Because the planet reflects sunlight rather than absorbing it, it reaches temperatures as low as minus 201 degrees C (minus 330 degrees F).

Enceladus is only one-seventh the diameter of Earth's moon. It is the sixth largest and most massive moon of Saturn. Like most spherical bodies, it takes the shape of an oblate spheroid, bulging out slightly around its equator due to the effects of gravity as it spins.

Because the moon is not very massive, and feels only the smallest tug of gravity at its surface, scientists were surprised to discover that it has an atmosphere, which dominates at its warmer south pole. Further observations by NASA's Cassini mission revealed cracks in the surface, known as 'tiger stripes', which periodically vented material into space. While some of the icy eruptions fed the moon's atmosphere, much of the material escaped into space. The icy discharge contributes to Saturn's massive E-ring, the largest planetary ring in the solar system, spanning over 600,000 miles (about a million kilometers). Unlike other rings, the gossamer E-ring is made up of tiny particles rather than large chunks of rock.

At least 101 geysers vent icy material from beneath the moon's into space as the moon interacted with its parent planet. Gravitational forces open and close the cracks as Enceladus travels closer to and farther from Saturn over the course of its elliptical 1.37-Earth-day orbit. It's possible that the geysers reach directly into the ocean, which could mean a spacecraft passing over top could sample the ocean below without needing to dive right in. One mission concept called Life Investigation for Enceladus (LIFE) would bring these samples directly back to Earth. [VIDEO: Surprising Geyser in Space: Cold Faithful on Enceladus]

The geysers are at their strongest when the moon is farthest from Saturn, but gas output does not increase at that time. This is counterintuitive to what scientists thought and suggests that something interesting is going on with the internal plumbing. Also, at least some of Enceladus' geysers have decreased their output substantially since the Cassini mission began observing them in 2015, but the exact reason is not yet known.

Although the freezing moon should be too cold for liquid water, the presence of ammonia in the material streaming from Enceladus could act as antifreeze to keep water beneath the surface from freezing. The acidity detected from Enceladus' plumes also doesn't rule out life. Cassini detected other complex chemicals and organics in the vaporous plumes, which could make the moon a bright spot in the solar system when it comes to hosting life, making it an excellent target for further exploration.

This article was edited on March 1, 2018, to correct a math error in Enceladus' orbital parameters.