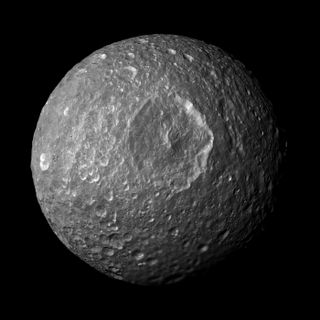 This mosaic, created from images taken by NASA's Cassini spacecraft during its closest flyby of Saturn's moon Mimas on Feb. 13, 2010, looks straight at the moon's Herschel crater and reveals new insights about the moon's surface. Herschel crater gives Mimas its "Death Star" appearance. It is about 80 miles (130 kilometers) wide.
(Image: © NASA/JPL/Space Science Institute)

With a giant crater covering a significant fraction of its surface, Saturn's gray moon Mimas resembles a real-life Death Star from the "Star Wars" movies. Along with its Pac-Man-shaped thermal imaging, the icy satellite provides some fascinating images.

The moon also has a strange interior that can't quite be explained yet from observations from the Cassini spacecraft. A 2014 study found that the libration (wobbling) of Mimas — caused by interactions between its rotation and its orbit around Saturn — was more pronounced in one particular spot. This suggests that the interior is not uniform in some way; perhaps there are different materials or densities, or perhaps its core is oval-shaped.

An ocean is a less distinct possibility because any heat generated would likely escape through the icy surface, freezing what is inside, the study added. This would make Mimas different from other icy moons in the Saturn system that likely have oceans, most particularly Enceladus (famous for its dozens of spewing geysers).

Using his 40-foot reflector telescope, English astronomer Sir William Herschel discovered his second moon of Saturn on Sept. 17, 1789, the seventh known satellite at the time. Herschel had spotted Enceladus less than a month before.

At the time, the icy bodies were named based on their distance from the ringed planet. As Mimas had the closest orbit — in fact, it is the closest of Saturn's major moons — it was termed Saturn I. It wasn't until 1847 that Herschel's son, John, suggested the satellites around the gas giant be named after the Titans, the mythological siblings of the Greek god Cronus, known to the Romans as Saturn.

In Greek mythology, Mimas was slain during the war between the Titans and the Olympians. Varying accounts have the Titan slain by Hercules, by Ares, or by Zeus. According to legend, Mimas' serpent legs continued to hiss after his death, seeking vengeance on his killer. The island of Prochyte, which lies near Sicily, is said to rest on his body.

Mimas has one of the most heavily cratered surfaces in the solar system. The overlapping depressions cover the surface, with several reaching sizes of 25 miles (40 kilometers) in diameter. Many of these overlap. In the south pole, however, craters are smaller than 12.4 miles (20 km) across, indicating the region underwent some form of resurfacing later in its history. [Photos of Mimas: Saturn's Death Star Moon]

The most noticeable sign of impact is the gaping Herschel crater, which spreads across an enormous portion of the satellite. At 88 miles (140 km) across, the crater covers nearly a third of the moon's 246 mile (396 km) diameter. A similarly sized crater on Earth would be 2,500 miles (4,000 km) in diameter. Scientists think that the impact nearly demolished the tiny moon; shock waves from the crash appear on the far side of the satellite.

The giant bulls-eye gives the crater a similar appearance to the Death Star. The resemblance is coincidental, however; Mimas is so small that features on it weren't seen until the Voyager space probe spotted it in 1980, three years after the blockbuster "Star Wars" premiered.

A temperature map created by data from NASA's Cassini spacecraft also reveals a Pac-Man shaped figure, seemingly prepared to gobble up the massive crater. Temperatures around the crater are cooler than more distant regions of the moon, with a warm spot showing up at the crater itself. A similar shape shows up on another of Saturn's moons, Tethys. The iconic configuration could occur as high-energy electrons bombard the leading edge of the satellites in their orbits, turning it into hard-packed ice that shifts its temperature more slowly than other parts of the moons.

Although the moon is the smallest of Saturn's major satellites, it apparently cleared sufficient material to create the 2,980-mile (4,800-km) wide gap between the two largest rings. Known as the Cassini Division, the large break sits between Saturn's A and B rings.

Traveling only 115,280 miles (185,520 km) from Saturn, Mimas is the closest major moon orbiting the planet. It journeys around the giant once every 22 hours and 37 minutes, keeping one face perpetually turned toward its primary.

The density of the moon is only 1.17 times that of liquid water, leading scientists to conclude that it is composed primarily of water ice, with only a small sample of rock. At temperatures of minus 209 degrees C (minus 344 degrees F), the frozen surface behaves much like rock.

Mimas has a slightly elliptical orbit, which should cause more tidal heating in its interior. It lies closer than its fellow moon, Enceladus. But, the active geysers that are plentiful at the south pole of Enceladus lie in stark contrast to the heavily cratered, unchanging surface of Mimas. The disparity has led to the creation of the "Mimas test," which requires any theory explaining the plumes of Enceladus to also account for the entirely frozen surface of Mimas.

A 2016 presentation at the American Astronomical Society suggests that Mimas (as well as other moons of Saturn) has craters that could have been caused by debris from a previous generation of moons.