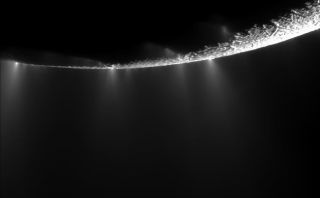 Dramatic plumes, both large and small, spray water ice out from many locations along the famed "tiger stripes" near the south pole of Saturn's moon Enceladus in this image taken by NASA’s Cassini probe on Nov. 21, 2009.
(Image: © NASA/JPL/Space Science Institute)

Thenewly released images from NASA's Cassini spacecraft show the geysersof Enceladus in stunning detail. The photos caught a bounty ofpreviously unknown plumes alongside known ones, and show at least one gusherthat's lost power since NASA?s last look at the moon.

Thenew images were taken during Cassini?s flyby on Nov. 21, 2009, andinclude the best 3-D look ever obtained of a "tiger stripe" — afissure that sprays icy particles, water vapor and organic compounds. Theyalso show regions of Enceladus that were not well-mapped in previous flybys,including a southern area with crudely circular tectonic patterns. NASA released the images Tuesday.

Bothlarge and small plumes were seen spouting from these famed tigers stripes alongEnceladus' south pole. Inone mosaic, created by two high-resolution images captured by thenarrow-angle camera, 30 individual jets can be seen. More than 20 of them hadnot been identified before.

Byphotographing the jets over time, Cassini scientists can study the consistencyof their activity.

"Thislast flyby confirms what we suspected," said Carolyn Porco, Cassini?simaging team lead at the Space Science Institute in Boulder, Colo. "Thevigor of individual jets can vary with time, and many jets, large and small,erupt all along the tiger stripes."

Thescientists also combined the visible-light images with heat data to create amap of a 25-mile (40-km) segment of the longest stripe, known as BaghdadSulcus. The map illustrates the link between the geologically youthful surfacefractures and the anomalously warm temperatures that have been recorded in thesouth polar region.

Inthese measurements, peak temperatures along Baghdad Sulcus exceed minus 135degrees Fahrenheit (minus 93 degrees Celsius), and may be higher than minus 100degrees F (minus 73 degrees C). The temperatures, considered warm forEnceladus, probably result from heating of the fracture flanks by the warm,upwelling water vapor that propels the moon?s ice-particle jets.

"Thefractures are chilly by Earth standards, but they're a cozy oasis compared tothe numbing 50 Kelvin (minus 370 Fahrenheit) of their surroundings," saidJohn Spencer, a composite infrared spectrometer team member based at SouthwestResearch Institute also in Boulder. "The huge amount of heat pouring outof the tiger stripe fractures may be enough to melt the ice underground."

SomeCassini scientists infer that the warmer the temperatures are at the surface,the greater the likelihood that jets erupt from liquid.

TheNov. 21 flyby, which brought the spacecraft to within 1,000 miles (1,600 km) ofthe moon's surface, was the eighth targeted encounter with Enceladus.It's the last look at Enceladus' south polar surface before that region goesinto 15 years of darkness, NASA officials said.

Andnow that the Cassini mission has been extendedthrough 2017, with 11 Enceladus flybys slated for the extension period, thereare plenty of chances to capture more images of this icy moon. The spacecraftlaunched in 1997 and has been orbiting Saturn since 2004.