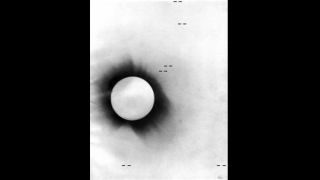 Negative photo of the 1919 solar eclipse taken from Príncipe Island. The position of the stars that were examined in the historic test of Einstein's theory of gravity are marked in this photo.
(Image: © F. W. Dyson/A. S. Eddington/C. Davidson/Royal Astronomical Society)

One hundred years ago today, in the wake of the first World War, a British astronomer watched a solar eclipse for signs that a German physicist may have been right about warps in the universe.

The bold new theoretical ideas belonged to Albert Einstein, whose last name is synonymous with genius. But his name didn't always produce that feeling: People doubted that his theories described reality, and it took a special experiment during a solar eclipse to cement Einstein as a physics legend.

Solar eclipses are just as miraculous as they might feel: Every few years, Earth's moon is able to completely and precisely blot out the body of the sun as viewed from our planet. As pictures taken by NASA's Curiosity rover in March 2019 point out, planets like Mars don't have the same luck, even with two moons to work with. The position and size of Earth's moon happens to exactly coincide with the position and size of the sun.

In addition to being a spectacle, solar eclipses provide opportunities to do different kinds of research, like studying the solar corona — the sun's outer atmosphere — or nature's responses to the dimming light. In 1919, Arthur Eddington and his research team set out to look for signs that the gravity of massive objects could bend light, proving Einstein right and positively developing theoretical physics beyond the classical mechanics of Isaac Newton.

If starlight traveling past could be diverted by the sun's massive bulk, the stars would appear in slightly different positions when viewed from Earth after passing the sun. But when the sun is in the sky, it's too bright to see nearby stars — except for during an eclipse.

On May 29, 1919, Eddington observed a lengthy solar eclipse from Príncipe, an island off of the coast of West Africa. Simultaneously, astronomers took observations from the Brazilian town of Sobral. The team used transportable instruments to record where the stars of the Hyades cluster — which form the bull's face in the constellation Taurus — appeared to be in the sky and compared these observations with Eddington's earlier notes about where the stars normally are when seen in the nighttime sky.

At their most pronounced, the findings would show a maximum shift in starlight "equivalent to the angle subtended by a quarter viewed from two miles away," author Ron Cowen writes in his new book, "Gravity's Century" (Harvard University Press, 2019).

Eddington got creative with his instrumentation for the special experiment. "The expedition used coelostats, which are mirrors designed specifically for observing the sun, responsible for reflecting light into the telescope lens," Cowen told Space.com in an email. "The mirrors were needed because the telescopes, to simplify travel, had no mechanical devices to drive/rotate the steel tubes containing the lenses. Normally, there would be such a mechanical device to keep the telescopes aligned on a target as the Earth rotated. If a telescope can't rotate, the stars move during a photographic exposure and streaks appear instead of a sharp image."

Instead of having to move the whole telescope to keep the instrument fixed on the Hyades and the solar eclipse, a small clockwork device moved the mirrors to correct for Earth's rotation, Cowen added.

When the results came in, the scientists calculated that the Hyades' starlight had indeed shifted when passing by the sun on a path towards Earth.

Einstein thought up this possibility — that the gravity of an object with enough mass could bend light — when combining mathematical equations and thought experiments (those carried out in the imagination) to determine that light will appear to travel at the same speed to any set of observers that are travelling at a consistent velocity. That's the Theory of Special Relativity.

But when Einstein began to ponder how light would appear when an observer is accelerating, he realized that space and time are woven into a single continuum, and that gravity is a part of this fabric; gravity is like the dip in a trampoline's surface (space-time) where a ball (massive object) rolls across it. As the ball travels in a straight line, the dip alters its path.

Eddington's pacifism drew criticism when he declined to fight in World War I, and some have argued that the scientist held a bias as he supported Einstein, a German scientist whom he saw as opposing past nationalist feuds and embracing humanism. Cowen argues that Eddington's religious beliefs — he was a Quaker — complemented his support for Einstein's bold scientific progress.On the other hand, author and physicist Daniel Kennefick argues that Eddington's world views came secondary to the science that he thought was valid.

"It was no longer clear how to interpret variables in Newton's law of gravity in light of the discoveries of special relativity," Kennefick told Space.com in an email. He added that the mass of the sun is important for the light deflection test, and according to Newton, knowing the sun's speed through the galaxy was necessary to determine its mass. But Einstein's 1915 Theory of General Relativity offered a simpler view: "the sun's motion through the galaxy doesn't matter because we are moving along with the sun in that motion," Kennefick said. This allowed experimentation, like the light-bending observations Eddington ultimately did take, to hold merit.

Cowen's book "Gravity's Century: From Einstein's Eclipse to Images of Black Holes" was published May 6. Kennefick's book "No Shadow of a Doubt: The 1919 Eclipse That Confirmed Einstein's Theory of Relativity" was also published this year.