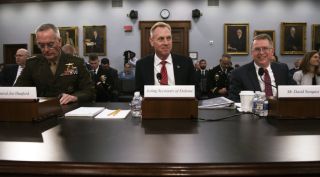 WASHINGTON — The Congressional Budget Office estimates the new space organizations proposed by the Pentagon would require thousands of additional personnel and cost several billion dollars more than what DoD has projected.

In a new report released on May 8, CBO lays out personnel requirements and cost estimates for several proposed space organizations. The most controversial, an independent military branch for space, would add up to $1.3 billion a year in additional costs — a number far higher than the $500 million a year projected by DoD. A new military service, a combatant command and a Space Development Agency collectively would increase DoD's cost by up to $1.9 billion annually.

The CBO report was prepared at the request of the chairman and ranking member of the Senate Armed Services Committee. "In keeping with CBO's mandate to provide objective, impartial analysis, the report makes no recommendations," CBO Director Keith Hall wrote.

Related: What Is the U.S. Space Force?

CBO calculated the cost of five different organizations: a Space Force as a separate military department, a Space Force placed under the Air Force (what DoD has proposed), a combatant command, a Space Development Agency and a space policy directorate.

The Trump administration in the Pentagon's budget request for fiscal year 2020 seeks funding for three of those five options: a Space Force, U.S. Space Command and a Space Development Agency. If these organizations, once fully established, were about the same size as the ones that CBO examined in this report, the administration's proposal would require 5,700 to 9,700 new positions, increase DoD's annual costs by $1.1 billion to $1.9 billion, and incur onetime costs of $1.8 billion to $4.7 billion.

CBO's numbers align closer to the $13 billion five-year cost estimate for a Space Force and a Space Command put forth by Air Force Secretary Heather Wilson in September in a memo. Her numbers were dismissed by Pentagon officials and Space Force proponents on Capitol Hill who claimed they were overinflated.

During a hearing on Wednesday of the Senate Appropriations Committee's defense subcommittee, Acting Defense Secretary Patrick Shanahan stood by his previous statements that the Space Force would cost no more than $2 billion over five years. That number, "in my view, is overstated," Shanahan told lawmakers.

CBO analysts agree with a number of lawmakers who questioned DoD's proposal for lacking specifics about the scope and size of the Space Force, which makes it difficult to figure out the long term costs. "The administration has provided few details about what the three organizations that it has proposed would look like or how large they would be," says the report. For 2020, the initial year of creating those organizations, DoD has requested $306 million and 827 positions, and it has also stated that it plans to have the new organizations fully running within five years.

According to CBO, a new service within the Department of the Air Force would require 4,100 to 6,800 personnel and increase annual costs by $820 million to $1.3 billion. DoD has proposed a Space Force of about 15,000 people. CBO says additional personnel likely would be needed for overhead and management functions that are typically required to run a military service.

CBO estimated that about 23,000 full-time positions within DoD are dedicated to space activities or support those who do, excluding space activities in the intelligence agencies. Currently, 93 percent of those positions are in the Department of the Air Force.

Some current positions in DoD would be transferred to a new space organization and thus would not increase DoD's total costs but nonetheless congressional analysts believe additional people will be needed to staff three new organizations.

CBO's analysis does not account for any new capabilities; it includes only the cost of new administrative structures. It assumes that positions transferred from existing services to a new organization would not be filled again by the existing services. If they were, costs would increase.

Also, CBO's estimates of the additional costs of establishing a space organization focus on overhead and management costs and do not include the cost of adding new capabilities. "In that sense, CBO's estimates probably represent the lower end of the range of possible costs," the report says.

Defense and budget analyst Todd Harrison, of the Center for Strategic and International Studies, is mentioned in the report as a contributor. But Harrison on Twitter blasted the CBO report for adding costs for personnel that might not be needed.

"It assumes a larger overhead/management structure, adding 4,100 to 6,800 new personnel," Harrison tweeted. Harrison developed his own estimate last fall in a rebuttal to Wilson's memo.

"CBO arrived at the higher number of new personnel in part because it assumed that no Air Force base operations, command, logistics, and medical personnel currently support space forces and therefore would not transfer to the new service," Harrison said. "Congress needs to make sure the Air Force and other services actually transfer all of the space-related support and headquarters personnel to the new service. Otherwise, new people will need to be hired to do the jobs of the people that don't transfer over, and that will jack up the cost."