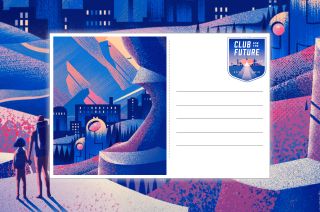 Jeff Bezos is adding another title to his credit: space postmaster.

The Amazon CEO and founder of Blue Origin on Thursday (May 9) announced that his private spaceflight company has created a new program to inspire today's youth to think about their future in space. To get them started, Bezos plans to launch and return 10,000 stamped postcards with students' visions for humanity beyond Earth.

"One of the things we have to do is inspire the future generations," said Bezos during a press event where he also unveiled his own far-reaching vision for space settlement, including Blue Origin's Blue Moon lunar lander. "So today, I am announcing that Blue Origin is founding the Club for the Future, whose mission is to inspire young people to build the future of life in space."

Billed as a "new kind of space club," Blue Origin's non-profit Club for the Future is open to students in kindergarten through high school, their parents and educators who are interested in efforts to preserve Earth and want to "unlock the potential of living and working in space." The Club will organize initiatives and campaigns that make use of Blue Origin's access to space.

The Club's first activity is to send students' postcards on a suborbital flight aboard Blue Origin's New Shepard rocket and spacecraft.

According to the Club for the Future website, students are invited to create their "first space mail" by using a blank white postcard to "draw or write your vision of millions of people living and working in space."

Bezos shared his own ideas for the future during his presentation on Thursday, citing in part the concepts first proposed by physicist and Space Studies Institute founder Gerald K. O'Neill.

"What O'Neill and his students came up with was the idea of manufactured worlds, rotated to create artificial gravity with centrifugal force. These are large structures, miles on end, and they hold a million people or more each," said Bezos. "This is a very different kind of space colony."

Once Club for the Future members have written or illustrated their concepts for a space-based civilization, they then need to address the postcard to themselves, affix a stamp for the return postage, place the postcard in an envelope and mail it to the Club For The Future (at PO Box 5759, Kent, Washington 98064).

The first 10,000 postcards that the Club receives before July 20, 2019 — the 50th anniversary of the historic Apollo 11 first moon landing — will be flown on board a New Shepard crew capsule.

"Your idea will launch into space! Once New Shepard returns to Earth, we'll send your postcard back to you, officially stamped 'flown to space,'" reads the Club for the Future website.

The club's "Postcard from Space" activity joins a long history of rocket-launched mail (or "rocket mail") that dates back to 1931 and 102 letters that traveled by a solid-fuel rocket three decades before the world's first satellite entered Earth orbit. Later, in July 1969, Apollo 11 astronauts Neil Armstrong, Buzz Aldrin and Michael Collins postmarked an envelope while on their way back from the moon.

The Club for the Future's postcard program is just the beginning.

"I want to inspire you," said Bezos. "and so think about this. Big things start small."

For step-by-step instructions on how to participate in Postcards from Space, see Blue Origin's Club for the Future website.