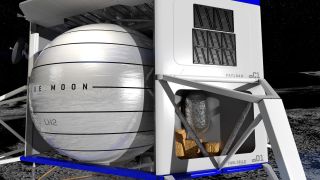 The billionaire space rivalry may have flared up again.

SpaceX chief Elon Musk took a playful and crude swipe via Twitter yesterday (May 9) at Jeff Bezos, after the world's richest man unveiled the Blue Moon lunar lander being developed by his spaceflight company, Blue Origin.

"Oh, stop teasing, Jeff," Musk wrote in a post that linked to a New York Times story about Blue Moon, which Bezos said will be able to take both cargo and people to the lunar surface, with a first flight targeted by 2024.

The Times story featured a photo of a Blue Moon mockup that Bezos showed off at an event in Washington, D.C. yesterday. "Blue Moon" is emblazoned on the mockup's spherical liquid-hydrogen propellant tank. But Musk took it upon himself to (very inexpertly) edit that text, erasing "Moon" and writing "Balls" in its place.

"Competition is good. Results in a better outcome for all," Musk wrote in another tweet, responding to a Twitter follower who asked for his thoughts about Blue Moon. "But putting the word 'Blue' on a ball is questionable branding," he added later in the thread.

SpaceX has lunar ambitions of its own. Musk's company is developing a huge rocket called Super Heavy and a spacecraft called Starship to ferry people to and from the moon, Mars and other destinations throughout the solar system. A test version of Starship called Starhopper has already taken a few short, tethered flights at SpaceX's South Texas facility.

Musk and Bezos have exchanged barbs before.

Both SpaceX and Blue Origin are developing reusable rockets and spacecraft, to slash the cost of spaceflight and help open the heavens to exploration. Blue Origin managed to land one of its rockets first, notching the milestone in November 2015 during a test flight of its suborbital New Shepard vehicle.

Musk congratulated Bezos via Twitter shortly afterward but also emphasized that landing an orbital rocket such as SpaceX's two-stage Falcon 9 is much harder to do. Bezos responded by pointing out in a news conference that month that the Falcon 9's first stage doesn't actually reach orbit.

SpaceX landed a Falcon 9 booster for the first time in December 2015, bringing a first stage down to Earth at Florida's Cape Canaveral Air Force Station. Bezos congratulated SpaceX with a tweet that seemed to have a little sass to it: "Congrats @SpaceX on landing Falcon's suborbital booster stage. Welcome to the club!"

This isn't to imply that there's actually bad blood between the two billionaires. For example, Bezos tweeted well wishes to Musk in February 2018, shortly before the first-ever test flight of SpaceX's huge Falcon Heavy rocket. (Musk responded with a simple "Thanks" and a kiss-blowing emoji.)

Both entrepreneurs have similar, and very ambitious, goals. Musk has said repeatedly that he founded SpaceX primarily to help colonize Mars, thereby making humanity a multiplanet species. And Bezos has stressed that Blue Origin's ultimate objective is to help get millions of people living and working in space.