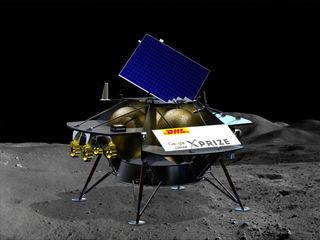 An artist's illustration of Astrobotic's Peregrine lander on the surface of the moon.
(Image: © Astrobotic Technology)

MOFFETT FIELD, Calif. — The moon may soon be a very busy place.

A number of private companies and national governments are planning missions to the lunar surface in the next few years, and the spate of activity could lay the foundation for human outposts on Earth's nearest neighbor in the not-too-distant future.

"It's a pretty pivotal moment, we think, for the moon, and the country, and the world," Dan Hendrickson, vice president of business development for the Pittsburgh-based company Astrobotic, said Wednesday (Jan. 10) at the Lunar Science for Landed Missions Workshop, which was held here at NASA's Ames Research Center. [Moon Master: An Easy Quiz for Lunatics]

Astrobotic is developing a lunar lander called Peregrine, which the company says will be able to deliver up to 584 lbs. (265 kilograms) of payload to the surface of the moon. Astrobotic has already set a price for this off-Earth transportation service — $1.2 million per kilogram of payload, or about $545,000 per pound.

Peregrine is scheduled to make its first moon trip in early to mid-2020, and the manifest for that "Mission 1" already incorporates deals with 11 partners, Hendrickson said.

The goal is eventually to get Peregrine landers flying often, ferrying a variety of gear to the moon for many customers.

"We're here to serve you and provide a core spacecraft bus for all the different types of mission profiles, whether it's sample-return, whether it's resource utilization," Hendrickson told the workshop attendees, most of whom were planetary scientists and engineers.

Hendrickson was on a panel Wednesday with representatives of several other companies working on their own lunar landers: Jeff Bezos' Blue Origin, Florida-based Moon Express and Japanese startup iSpace.

A.C. Charania, manager of advanced programs at Blue Origin, laid out the basic vision for the company'"Blue Moon" lander, which he said will be capable of putting up to 10,000 lbs. (4,500 kg) of payload down on the lunar surface.

Blue Origin aims to be ready to fly its first Blue Moon mission in "the next few years," Charania said. And that will be just the beginning, if everything goes according to plan. [Photos: Glimpses of Secretive Blue Origin's Private Spaceships]

Blue Origin plans to mount "a cadence of missions that build a capability," Charania said at the workshop. "That's our goal. It's not just a single return; it's a return to enable a permanent presence robotically and, eventually, with humans as well."

Such ambition should not be surprising; Bezos has stressed that Blue Origin wants to help make humanity a truly spacefaring species, with millions of people living and working off-Earth.

"Our vision is really to expand Earth's economic and social sphere to include the moon," Alain Berinstain, the company's vice president of global development, said during the panel discussion. "We see the moon as the Earth's eighth continent to explore and to also mine for resources, like we have with every other continent on Earth."

Chief among those resources is water ice, which can be split into its constituent hydrogen and oxygen, the components of rocket fuel. Space mining could therefore enable the construction of off-Earth propellant depots, allowing spacecraft to fill their tanks on the go, advocates say.

Moon Express aims to help make this happen with its MX family of spacecraft, the core piece of which is an exploration vehicle about the same size and shape as R2-D2 from "Star Wars." Moon Express plans to launch one of these MX landers to the moon by March 31 of this year, in an attempt to win the $30 million Google Lunar X Prize (GLXP) competition.

A single MX could put 22 to 44 lbs. (10 to 20 kg) of payload down on the lunar surface. But Moon Express' planned MX-5 and MX-9 spacecraft — which incorporate five and nine of the core lander units, respectively — could land hundreds of kilograms, Berinstain said.

The MX-5 and MX-9 will also come in a sample-return configuration, Moon Express representatives have said. And these craft, along with another one called the MX-2, could explore a variety of celestial bodies in addition to the moon.

iSpace also has a GLXP connection: The company's 9-lb. (4 kg) rover is based heavily on the wheeled explorer being sent to the moon by contestant Team Hakuto. Indeed, iSpace refers to Hakuto's GLXP effort as "Mission 0"; Missions 1 and 2 are currently targeted for 2019 and 2020, respectively.

iSpace's vision involves mapping lunar resources with swarms of rovers, which the company will deliver to the moon, iSpace spacecraft system engineer Jamie Denniston said at the workshop.

"Beyond that, in the longer term — starting maybe in the 2030 range — we plan to be a key part of the extraction process and delivery of lunar resources," Denniston said.

National governments are also interested in assessing these resources, partly to help pave the way for crewed missions and, eventually, permanently staffed outposts on the moon. If everything goes according to plan, both NASA and Russia's Federal Space Agency, known as Roscosmos, will launch robotic prospecting missions to the lunar poles in 2022.

NASA's effort, called Resource Prospector, doesn't have a landing site yet. The Russian mission — a collaboration with the European Space Agency known as Luna 27 — will target the South Pole-Aitken basin, on the moon's far side.

Other nations aim to touch down even sooner. For example, India plans to launch its Chandrayaan-2 moon mission, which includes a rover and an orbiter, this spring. China's Chang'e 4 mission to the lunar far side is due to launch this year, and the Chang'e 5 sample-return effort is scheduled for 2019. And Japan is developing a demonstration mission called Smart Lander for Investigating Moon, with a launch possibly coming in the next few years.

"We think, genuinely, there's about to be an explosion in this area of exploration," Denniston said. "We think we're in the right place at the right time."