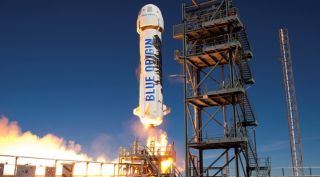 COLORADO SPRINGS, Colo. — Jeff Bezos' private spaceflight company Blue Origin is working on a lunar cargo delivery service, which could be used to support human settlements on the surface of the moon or in orbit. While the program was just announced last month, the company has already spent years developing the necessary technology.

Meyerson didn't provide any more details about the lunar landing system, but a story published March 2 in The Washington Post (which Bezos purchased in 2014) said that the Blue Moon vehicle would land on the lunar surface similar to how the New Shepard reusable rocket booster lands in a vertical position after flight. The article also said the Blue Moon system could carry "as much as 10,000 pounds of material."

The New Shepard suborbital rockets have yet to fly customer payloads, but test flights have shown that the rockets can land vertically, and that the boosters can be reused for subsequent flights.

Blue Origin representatives have said that reusable rockets will lower the cost of access to space, and the company plans to make a reusable first-stage booster for its upcoming orbital rocket, New Glenn.

"Reusability is the holy grail of rocketry," Meyerson said.

Apparently, it could also help establish human colonies on the moon.

Meyerson said Blue Origin is "working very closely with NASA" on the Blue Moon program. The agency has no immediate plans to build human settlements on the moon, but it is currently considering a small space station in lunar orbit as a "gateway" to deep-space destinations like Mars.

"We believe that commercial systems and services can augment NASA systems to meet the resupply needs of longer human missions in lunar orbit and enhance NASA capabilities," Meyerson said.

Many spaceflight industry experts agree that the lunar surface and lunar environment could provide a critical testing ground for technologies and skills needed to send humans to Mars.

"Blue Origin has recently proposed a lunar lander architecture to cost-effectively soft-land large amounts of mass up to the lunar surface," Meyerson said. "Any credible first lunar settlement is going to require such capability."

Besides human settlements that provide a steppingstone to Mars, the moon could also provide opportunities for space mining and science investigations.

A heavy-lift rocket will be necessary to send a cargo-delivery vehicle all the way to the moon. Meyerson said the Blue Moon vehicle is being "designed and optimized" to fly on NASA's upcoming Space Launch System (SLS) rocket. But the vehicle could also fly on several different launch rockets, including a United Launch Alliance Atlas V, and Blue Origin's own New Glenn, a heavy-lift rocket still in development.

When asked whether Blue Moon might fly humans to the lunar surface, Meyerson said the system was being designed only for cargo.