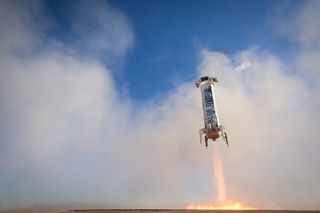 A brilliant column of fire, blasting out the back of a rocket ship, lit up the cool blue sky above the west Texas desert on Saturday (April 2), when the private spaceflight company Blue Origin successfully launched and landed its New Shepard vehicle for the third time.

Blue Origin's photos and amazing video of the New Shepard launch show the rocket heading skyward, where it eventually separated from the crew capsule (although no one was inside). The crew capsule parachuted back to Earth, but the rocket booster used its thrusters to make a graceful vertical landing.

This is the third time Blue Origin has flown this particular New Shepard vehicle, which makes the test flight somewhat historic. The company (which has been using the motto of "Launch. Land. Repeat." for the flights) is aiming to dramatically lower the cost of suborbital spaceflights by reusing its boosters, rather than discarding them, which is what engineers have had to do with nearly every other rocket in history. Check out more photos from New Shepard's third launch and landing here.

For this flight, Blue Origin also had drones following the rocket as it headed skyward, giving some absolutely breathtaking images of the craft racing through the wide open sky, the capsule parachuting back to Earth, and the booster making its incredible landing.

"We pushed the envelope on this flight, restarting the engine for the propulsive landing only 3,600 feet [1097 meters] above the ground, requiring the BE-3 engine to start fast and ramp to high thrust fast," the company said in a blog post yesterday (April 3).

The private spaceflight company SpaceX is hot on Blue Origin's heels with its reusable rocket booster, which has also made successful vertical landings. SpaceX's rocket can send spacecraft to orbital altitudes above the Earth.