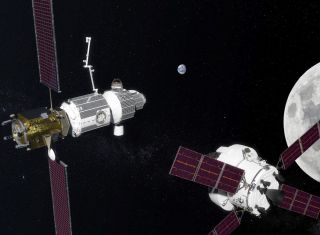 Artist's concept of NASA's "deep space gateway" in lunar orbit. This astronaut-tended outpost would serve as a stepping stone for crewed trips to Mars.
(Image: © NASA)

It looks like NASA's stepping-stone to Mars will be a miniature space station in lunar orbit rather than a chunk of captured asteroid.

The agency plans to build an astronaut-tended "deep space gateway" in orbit around the moon during the first few missions of the Space Launch System (SLS) megarocket and Orion crew capsule, which are scheduled to fly together for the first time in late 2018, NASA officials said.

"I envision different partners, both international and commercial, contributing to the gateway and using it in a variety of ways with a system that can move to different orbits to enable a variety of missions," William Gerstenmaier, associate administrator for Human Exploration and Operations at NASA headquarters in Washington, D.C, said in a statement. [Red Planet or Bust: 5 Crewed Mars Mission Ideas]

"The gateway could move to support robotic or partner missions to the surface of the moon, or to a high lunar orbit to support missions departing from the gateway to other destinations in the solar system," Gerstenmaier added.

One of those "other destinations" is Mars. NASA is working to get astronauts to the vicinity of the Red Planet sometime in the 2030s, as directed by former President Barack Obama in 2010. For the last few years, the agency's envisioned "Journey to Mars" campaign has included the Asteroid Redirect Mission (ARM), an effort to pluck a boulder from a near-Earth asteroid and drag the rock to lunar orbit, where it could be visited by astronauts aboard Orion.

But ARM's future looks bleak; President Donald Trump provided no money for the mission in his proposed 2018 federal budget, which the White House released earlier this month.

There's no mention of ARM in NASA's newly unveiled "gateway" plan, which outlines the basic architecture of a small, sometimes-staffed space station in lunar orbit.

"This deep space gateway would have a power bus, a small habitat to extend crew time, docking capability, an airlock, and [would be] serviced by logistics modules to enable research," NASA officials wrote in the same statement. "The propulsion system on the gateway mainly uses high-power electric propulsion for station-keeping and the ability to transfer among a family of orbits in the lunar vicinity."

Construction and initial use of the gateway would constitute phase one of NASA's crewed efforts in the vicinity of the moon, agency officials said. Phase two involves the completion of a reusable "deep-space transport spacecraft."

"This spacecraft would be a reusable vehicle that uses electric and chemical propulsion and would be specifically designed for crewed missions to destinations such as Mars," agency officials said. "The transport would take crew out to their destination [and] return them back to the gateway, where it can be serviced and sent out again."

If everything goes according to (the new) plan, phase two will wrap up at the end of the 2020s with a one-year mission near the moon, which will validate the ability of the gateway-transport system to operate for extended periods in deep space.

As currently envisioned, the first SLS-Orion flight — known as Exploration Mission 1 (EM-1) — will be an uncrewed journey that makes its way to lunar orbit. However, NASA is considering putting astronauts aboard the flight — a change that would likely delay the mission by at least a year.

The second mission, EM-2, is currently slated to send astronauts around the moon. It could launch as early as 2021. After EM-2, NASA aims to begin launching SLS-Orion missions once every year, NASA officials said.

The Orion capsule already has one space mission under its belt. In December 2014, the spacecraft launched atop a United Launch Alliance Delta IV Heavy rocket on an uncrewed test flight to Earth orbit.