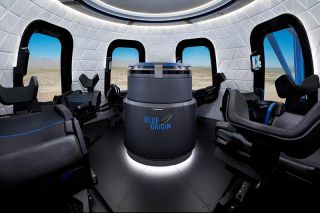 A visualization of the interior of Blue Origin's New Shepard vehicle, which the company plans to use to ferry tourists on short trips to space.
(Image: © Blue Origin)

Want to take a trip to space?

The images show sleek black seats, tilted back so passengers are facing up when the rocket takes off. But the real fun will come when the spacecraft reaches suborbital space and passengers will be able to get out of their seats and experience weightlessness in the roomy cabin.

Passengers can also look out the spacecraft's windows, which will be "the largest windows ever in space," the company said. As recently as October 2016, Bezos said the company was on track to make its first human test flights by the end of 2017, with the first customer flights taking place in 2018.

The New Shepard vehicle can reach suborbital altitudes, meaning not high enough to completely loop around the planet. (The Blue Origin customer flights will last about 11 minutes.) Besides its tourism function, the vehicle could serve as a microgravity laboratory, the company has said.

"Our New Shepard flight-test program is focused on demonstrating the performance and robustness of the system," Bezos said in a mass email update (these emails go out sporadically to people who subscribe on the company's website). "In parallel, we've been designing the capsule interior with an eye toward precision engineering, safety and comfort."

Blue Origin has made multiple successful test launches of its New Shepard vehicle, and these missions have included landing the spacecraft's reusable rocket booster. The company said it has also relaunched some of those used boosters. Reusable rocket boosters could help bring down the cost of spaceflight, Bezos and other spaceflight industry experts have said.

Space tourism isn't unique to Blue Origin. Virgin Galactic has already started selling tickets for a trip to space aboard one of the company's space planes. (Blue Origin is not yet selling tickets or revealing pricing information, but the company's website does let people sign up to receive early updates when those things become available). The private company World View is offering tourism trips aboard high-altitude balloons.

Last year, Bezos said Blue Origin would also like to eventually offer tourism trips to higher altitudes than New Shepard can reach. This would happen aboard the company's New Glenn orbital rocket, which is currently in production. Bezos said the company planned to give first access on those orbital space trips to customers who had already purchased suborbital trips on New Shepard.