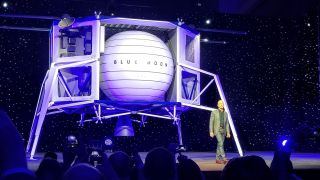 WASHINGTON — Blue Origin is shooting for the moon!

"This is an incredible vehicle, and it’s going to the moon," Blue Origin founder and chief executive Jeff Bezos told a room full of spectators after the curtain dropped to reveal the big, shiny spacecraft.

Blue Moon is designed to carry rovers and other large payloads to the lunar surface, but it could also take astronauts to the moon, said Bezos, who also founded Amazon.com and is the richest person in the world. To modify Blue Moon for a crewed spaceflight, the company would top the spacecraft with an attachable, pressurized ascent vehicle.

Before launching astronauts to the moon, Blue Origin would first test out the lunar lander with an uncrewed mission, Bezos said.

While Bezos did not explicitly state that Blue Origin plans to offer its new vehicle to NASA for the agency's ambitious push to land American astronauts on the moon in 2024, a newly posted description on the company's website states that the crew-carrying variant of Blue Moon "has been designed to land an ascent vehicle that will allow us to return Americans to the moon by 2024."

(Blue Origin representatives had mentioned Blue Moon before, but they hadn't given us a good look until today.)

NASA has not yet selected a lander for that historic trip, so Blue Moon may be a contender. Just last month, Lockheed Martin revealed its proposed plans to build a lunar lander. Lockheed's lander (which has yet to receive a proper name) would be part of the company's "early Gateway" infrastructure for a sustainable human presence on the moon.

Whether NASA astronauts can really make it to the moon by 2024 is still a subject of debate, but a few things are certain: private companies and other space agencies around the world are gearing up for a new wave of lunar exploration, and Blue Origin has entered the new moon race.