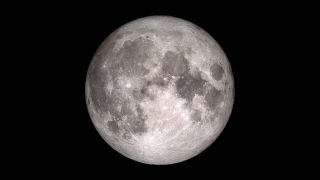 Fifty years after NASA won the "space race" with the Apollo 11 moon landing, the agency hopes to revamp its lunar exploration program with the help of international partners.
(Image: © NASA)

Now that China has landed the Chang'e 4 spacecraft on the far side of the moon and India is preparing to launch its Chandrayaan-2 mission to the lunar surface later this year, it may seem like the old "space race" is making a comeback. With other space agencies around the world making big plans for future lunar exploration, will NASA be left in the (moon) dust?

"I think time will tell," former NASA astronaut and moonwalker Harrison Schmitt said during a town-hall meeting with members of the National Space Council on Jan. 9 at the 233rd meeting of the American Astronomical Society in Seattle. "We will see whether Congress or the administration will recognize that there is a competition out there" and start to invest more in the space program, he added.

For now, rather than reigniting the decades-old space race to catch up with the newcomers, NASA is aiming to take a more collaborative approach by partnering up with countries like China and India, whose lunar adventures have only just begun. [NASA's Exploration Mission 1: A Step-by-Step Return to the Moon in Pictures]

"Americans first walked on its surface almost 50 years ago, but the next wave of lunar exploration will be fundamentally different," NASA officials said in a statement. "As NASA works toward its plan to sustainably return to the moon, it will be critical to collaborate with both commercial and international partners along the way. This approach will enable human expansion across the solar system and bring back to Earth new knowledge and opportunities."

As the first and only space agency ever to put humans on the moon, NASA technically won the "moon race" decades ago. But no astronauts have set foot on the moon since Schmitt and his Apollo 17 crewmate Eugene Cernan left more than 46 years ago. The last time NASA launched a mission to the moon was in 2013, when the agency sent the Lunar Atmosphere and Dust Environment Explorer (LADEE) spacecraft on an intentional collision course to the lunar surface. Other than the Lunar Reconnaissance Orbiter (LRO), which has been circling the moon since 2009, NASA currently doesn't have much of a presence on or around the moon.

In 2017, President Donald J. Trump called for NASA to return humans to the moon with the signing of his Space Policy Directive 1 — an official recommendation that was approved by the newly formed National Space Council. A cornerstone of this new objective will be NASA's Lunar Orbital Platform-Gateway, a proposed moon-orbiting space station that will enable human exploration of the moon as well as other deep-space destinations like Mars.

"Through an innovative combination of missions involving commercial and international partners, NASA's robotic lunar surface missions will begin as early as 2020, focus on scientific understanding of lunar resources and prepare the lunar surface for a sustained human presence," NASA officials said. The agency projects that it will put humans on the moon again in the late 2020s.

Schmitt said that a little competition between the new space superpowers of the world "can be very positive — it's certainly positive for human spaceflight as well as for space science." For example, if it weren't for the political tension between the U.S. and the Soviet Union that followed the launch of Sputnik 1, NASA astronauts may not have made it to the moon when they did (if at all). With Congress feeling immense political pressure at the time, NASA's annual budget skyrocketed. But as the space race died down in the 1970s, so did the generous financial support.

Although sparking another heated competition could be an effective way to convince lawmakers to dramatically boost NASA's funding, the agency instead hopes to move forward with a more peaceful, team-building approach.

"Things may evolve in ways we don't anticipate, but as of now, the Lunar Orbital Gateway is envisioned to be institutionally a bit like the International Space Station," meaning that international partners all work together in a shared space, said David Thompson, founder and former chief executive of Orbital ATK and a member of the National Space Council's Users' Advisory Group.

Of course, humans are not yet living and working on or around the moon, but the international cooperation has already started with the latest robotic mission. When Chang'e 4 landed on the moon, the China National Space Administration (CNSA) shared data with NASA so that the LRO could monitor the landing from orbit. Unfortunately, NASA was unable to get LRO into the right place at the right time to watch the impact, but the satellite still managed to scope out the landing site afterward.

"Science gathered about how lunar dust is ejected upwards during a spacecraft's landing could inform future missions and how they arrive on the lunar surface," NASA officials said. "NASA and CNSA have agreed that any significant findings resulting from this coordination activity will be shared with the global research community at the 56th session of the Scientific and Technology Subcommittee meeting of the U.N. Committee on the Peaceful Uses of Outer Space meeting" in Vienna on Feb. 11-22.

Around that same time, Israel will launch its first moon mission — thanks, in part, to a helping hand from the U.S. space agency. "NASA will not only help with observations from LRO and communications support during the mission, but has also developed a laser retroreflector that will fly onboard the Israeli lander," NASA officials said of the Israeli mission.

The European Space Agency (ESA) is also playing a role in NASA's lunar exploration plans. ESA is providing components for NASA's Orion crew capsule, which will begin launching astronauts beyond low Earth orbit in the 2020s. The European Service Module, ESA's contribution to Orion, was transported from an Airbus factory in Germany to NASA's Kennedy Space Center in Florida last November.

NASA hasn't been quite as involved with Chinese or Indian moon missions — at least not directly with the construction and operation of the spacecraft. However, the agency still hopes to work together with those other spacefaring nations by sharing data that could be useful for future missions, NASA officials said.

Meanwhile, NASA is working with nine private U.S. companies that will help the agency through its future lunar endeavors. "These companies will develop and build robotic landers that will carry NASA and other customers' payloads to the lunar surface," NASA officials said. "As NASA works toward its plan to sustainably return to the moon, it will be critical to collaborate with both commercial and international partners along the way. This approach will enable human expansion across the solar system and bring back to Earth new knowledge and opportunities."