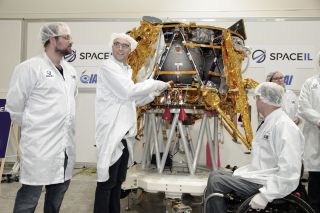 Yonatan Winetraub, one of three SpaceIL founders, inserts a time capsule into the compay's private moon lander, which is scheduled to launch in February 2019.
(Image: © Yoav Weiss)

The first-ever private moon mission is expected to launch in February 2019, and it will carry some extra-special Israeli cargo to the lunar surface.

The nonprofit SpaceIL and the government-owned corporation Israel Aerospace Industries (IAI), which manufactured the spacecraft, announced in a statement Monday (Dec. 17) that the lunar spacecraft, dubbed Beresheet will carry a digital time capsule with Israeli national memorabilia.

SpaceIL’s mission to the moon began as part of the Google Lunar X Prize competition. SpaceIL was the only Israeli team that participated in the competition, which originally offered a first prize of $30 million to the privately-funded team that could put a robotic spacecraft on the moon, move the craft 1,640 feet (500 meters) and have it beam high-definition photos and video back to Earth. [Moon Rush: These Companies Have Big Plans for Lunar Exploration]

However, no team was able to make a launch attempt to reach the moon by the March 31, 2018, and the Google Lunar X Prize competition ended with no winner.

Regardless, SpaceIL continued on with its mission to land a spacecraft on the moon. The corporation recently confirmed that Beresheet — meaning Genesis in Hebrew — completed a series of intensive tests and would soon be shipped to the launch site in Cape Canaveral, Florida, for launch in February.

"Aside from landing on the moon, SpaceIL's collective vision is to create a new 'Apollo Effect' to inspire the next generation in Israel and around the world to think differently about science, engineering, technology and math," company representatives said on SpaceIL's mission page.

Propelled by a SpaceX Falcon rocket launch, the robotic lander will lift off from Cape Canaveral in February. Beresheet was previously slated to launch to the moon before the end of this year, SpaceIL officials have said.

The time capsule, which consists of three small discs, includes digital files of memorabilia such as Israel's declaration of independence and national anthem, Hebrew songs, the Wayfarer's Prayer (the Jewish prayer for a safe journey), paintings by Israeli children, the Israeli flag, the Bible, Israeli literature, and other tokens of the country's heritage, according to the statement.

"This is a very emotional moment," Yonatan Winetraub, one of three SpaceIL founders, said in the statement. "It is very possible that future generations will find this information and want to learn more about this historic moment."

The Israeli groups have no plans to return Beresheet to Earth, so the spacecraft and time capsule will remain on the lunar surface indefinitely.

"This is another step on our way to the moon," Ido Anteby, CEO of SpaceIL, said in the statement. "Inserting the discs into the spacecraft, which is a real 'time capsule,' indicates the spacecraft's readiness to blast off from the launch site in a few weeks."

The exact launch date in February has not yet been announced and will be determined by the launch company.

"The spacecraft's historic journey, which also includes a scientific mission, makes a significant contribution to advancing the space industry and the subject of space in Israel," Anteby said. Along with carrying the time capsule, the spacecraft will also collect data on the lunar surface.

In October, SpaceIL and the Israeli Space Agency established a partnership with NASA, which will help the country to improve its ability to track and communicate with the spacecraft before, during and after its landing on the moon.

After that landing, NASA will be able to precisely locate the spacecraft on the lunar surface using an instrument called a retro-reflector, which reflects laser beams. A magnetometer, which will measure the magnetic field on and above the landing site, was also installed aboard the Israeli spacecraft. That instrument will relay important information to NASA and other teams, according to the statement.

"We are proud to be the first nongovernmental entity in the world to go to the moon," Opher Doron, IAI's space division general manager, said in the statement. "Landing on the moon was for many years a little-discussed topic among the public, but recently we see growing interest as world superpowers seek to return to the moon in a variety of commercial missions.

"There is no doubt that the technological knowledge acquired by IAI during the development and construction of Beresheet, together with Space IL and combined with the space capabilities developed over more than 30 years at IAI, puts us at the global forefront in the ability to complete lunar missions."