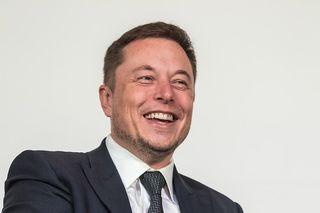 Elon Musk is an entrepreneur who is best known in space circles for launching SpaceX, a private aerospace design and manufacturing company. His company became the first private one to ship cargo to the International Space Station in 2012. Among Spacex's many accomplishments is its development of a self-landing version of their Falcon 9 rocket, a heavy-lift rocket called the Falcon Heavy, and the Crew Dragon, a crewed spaceship that will fly astronauts to the International Space Station.

A long-time advocate of Mars exploration, Musk has publicly talked about ventures such as building a greenhouse on the Red Planet and, more ambitiously, establishing a Mars colony. He also is rethinking transportation concepts through ideas such as the Hyperloop, a proposed high-speed system that would run between major cities.

The South African-born businessman describes himself as "an engineer and entrepreneur who builds and operates companies to solve environmental, social and economic challenges."

Musk is also the founder of electric car company Tesla Motors. In recent years, the businessman has been criticized for periodic negative comments on social media, such as those he made about rescue personnel after his offer to help Thai children trapped in a watery cave in 2018. The children were rescued, but without Musk's help.

Where did Musk get his money?

Musk grew up in Pretoria, South Africa, and earned degrees in physics and business from the University of Pennsylvania. His first venture after school was co-founding Zip2 Corp., an Internet company that provided software and services for businesses.

"Things were pretty tough in the early going. I didn't have any money — in fact I had negative money [because] I had huge student debts," Musk recalled in a 2003 Stanford lecture.

He showered at a local YMCA and lived in his office, managing to keep expenses very low despite his low revenue stream. "So when we went to VCs [venture capitalists], we could say we had positive cash flow," he said.

After Compaq bought Zip2 for more than $300 million in 1999, Musk turned his attention to online bill payments. That company, later known as PayPal, was sold to eBay for $1.5 billion in 2002.

Musk now had a fortune in hand, and at the tender age of 30 was looking to put his energies into something new. He began SpaceX (Space Exploration Technologies) in 2002 with ambitious plans to launch a viable, privately funded space company. In the face of naysayers, he doubled down and worked on a business plan.

Musk has repeatedly said that humans must be an interplanetary species to combat the threat of asteroids and potential human catastrophes, such as nuclear war and engineered viruses.

What is blocking us from doing that, Musk wrote in a 2008 Esquire piece, is "the ridiculously recalcitrant problem of big, reusable reliable rockets."

"Somehow we have to ... reduce the cost of human spaceflight by a factor of 100," he added. "That's why I started SpaceX. By no means did I think victory was certain. On the contrary, I thought the chances of success were tiny, but that the goal was important enough to try anyway."

The first successful rocket SpaceX flew, the Falcon 1, took four tries to get off the ground before a successful test flight in September 2008.

Musk funded SpaceX through his own money at first, and then gained enough experience to attract millions of dollars from NASA to develop his rockets and spacecraft, and to bring cargo to the ISS.

The company's track record was a factor in NASA awarding it money to develop the Dragon spacecraft for cargo runs to the International Space Station. Dragon won multiple rounds of funding under NASA's Commercial Crew program and made a world-first docking of a private spaceship with the International Space Station in 2012. It is now sending regular shipments of cargo to the station. [Infographic: How SpaceX's Dragon Space Capsule Works]

SpaceX is now developing a human-rated version of Dragon, called Crew Dragon, that is expected to take astronauts to the orbiting complex around 2019 or 2020. Like its cargo counterpart, the Crew Dragon spacecraft received money from NASA for development and is now one of two spacecraft types (along with Boeing's CST-100 Starliner) in the final stages of testing for carrying humans.

NASA announced crews for the first Dragon flights in August 2018. Musk was rather emotional after watching Crew Dragon make its first (uncrewed) flight to space in March 2019, en route to a successful docking with the ISS. In the future, Crew Dragon may not only carry astronauts, but paying space tourists as well, Musk has suggested to reporters.

Dragon is hefted using a rocket called the Falcon 9. Since 2014, SpaceX has attempted to reuse the first stage of the rocket by landing it in various situations. To date, SpaceX has successfully achieved ocean, land-based and barge landings of the Falcon 9's first stage.

In March 2018, SpaceX successfully flew a heavier rocket, the Falcon Heavy, on its maiden flight, carrying a Tesla car and an astronaut mannequin named "Starman." The rocket blasted its cargo to low Earth orbit, and then an upper stage fired to carry the car somewhere toward Mars and the asteroid belt.

Although its two side boosters landed successfully on twin pads at Cape Canaveral Air Force Station, its center rocket core crashed and burned. All three rockets returned to Earth successfully after Falcon Heavy's second launch, on April 11, 2019, although the central core stage did not survive the journey back to shore from its ocean drone-ship landing pad, due to high sea swells. Falcon Heavy successfully completed its first night launch about two months later, on June 25, landing both side boosters successfully but narrowly missing a soft touchdown with the center rocket core.

SpaceX is also building a large Internet constellation of satellites called Starlink; the first 60 of these vehicles launched successfully into space — on top a SpaceX Falcon 9 rocket, naturally — in May 2019. Earlier that month, Musk told reporters that if everything goes well with the constellation, Starlink will generate $30 billion to $50 billion each year for SpaceX. (The company's launch revenue, by comparison, is about $3 billion a year.) Musk is busy with projects in several other companies, and has even ventured into artificial intelligence. In July 2019, Microsoft funnelled $1 billion into an artificial intelligence project co-founded by Elon Musk, called OpenAI.

Musk is a frequent user of social media and received the Stephen Hawking Communication Prize in 2019 for his work. Sometimes Musk discusses ideas that are early design thoughts, or philosophical musings (such as the time we said we may all be trapped a simulation).

Occasionally, however, Musk has attracted negative attention for his remarks. In 2018, Musk made critical comments about a rescuer trying to help Thai boys trapped in a cave. He later apologized for the comments about the rescuer amid worldwide criticism.

That same year, NASA carried out a safety review of SpaceX (as well as Boeing) after Musk appeared to smoke weed on comedian Joe Rogan's podcast in September. Also, Musk paid a fine after the Security and Exchange Commission examined tweets about another of his companies, Tesla.

Will Musk go to Mars?

Musk has said that around 2002, he looked up the schedule for when NASA was supposed to send astronauts to Mars, and was shocked to see there was no timeline. (Today, NASA says it hopes to land astronauts on the Red Planet in the 2030s). That's when he says he came up with an idea to do a simple Mars mission "to spur the national will," Wired reported.

Musk envisioned a revolutionary greenhouse on Mars, but he eventually scratched the idea because of financial concerns.

In 2012, he sketched out plans to establish a Mars colony,, with 80,000 people living on the Red Planet. Musk later tweeted that he meant to say 80,000 people would make the journey per year.

Musk has continued to discuss and revise his plans several times over the years. He unveiled an Interplanetary Transport System (ITS) in 2016 that is intended to take humans to Mars with SpaceX technology. At the time, the ITS booster (a huge rocket not yet built) was expected to carry up to 100 people at a time to low Earth orbit and then send people to Mars in as little as 80 days, as long as Earth and Mars remain close to each other, Musk said. He also warned that some of the first Mars settlers would likely die during the journey.

Since then, he's revised the ITS concept to say that the colonists would use a rocket called the BFR — also known as the Big Falcon Rocket. Then in November 2018, Musk rebranded BFR and announced new names for the spaceship or upper stage (now known as Starship) and the rocket booster (now known as Super Heavy).

SpaceX is now preparing a prototype of the Starship spaceship called Starhopper. Starhopper has made two brief hops while tethered to the ground (as of July 2019) and also survived an incident in which the vehicle was briefly surrounded in flames during an otherwise routine static-fire test of its next-generation Raptor engine.

While Musk is focused on Mars, he has said that he would also willingly participate in a moon base; He even unveiled conceptual designs of a "Moon Base Alpha" (along with a Mars base, of course). In 2018, Musk suggested that the first SpaceX Mars base could be on the Red Planet by 2028.