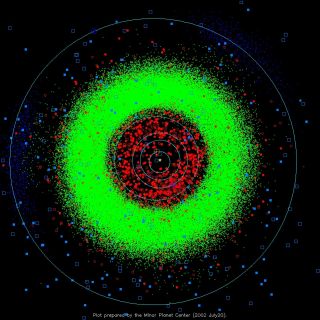 Orbits of inner planets are shown as large circles in this computer-generated snapshot of actual known objects as of July 20, 2002. Green dots represent asteroids in the main belt between Mars and Jupiter. Red dots are asteroids that stray out of the main belt and pose a small but known possible risk of hitting Earth.
(Image: © MPC, CBAT, Harvard CfA, IAU)

Scattered in orbits around the sun are bits and pieces of rock left over from the dawn of the solar system. Most of these objects, called planetoids or asteroids — meaning "star-like" — orbit between Mars and Jupiter in a grouping known as the Main Asteroid Belt.

The Main Asteroid Belt lies more than two-and-a-half times as far as Earth does from the sun. It contains millions of asteroids, according to NASA. Most of these are relatively small, from the size of boulders to a few thousand feet in diameter. But some are significantly larger.

Early in the life of the solar system, dust and rock circling the sun were pulled together by gravity into planets. But not all of the ingredients created new worlds. A region between Mars and Jupiter became the asteroid belt.

Occasionally people wonder whether the belt was made up of the remains of a destroyed planet, or a world that didn't quite get started. However, according to NASA, the total mass of the belt is less than the moon, far too small to weigh in as a planet. Instead, the debris is shepherded by Jupiter, which kept it from coalescing onto other growing planets.

Observations of other planets are helping scientists to better understand the solar system. According to a developing theory known as Grand Tack, in the first 5 million years of the solar system, Jupiter and Saturn are thought to have moved inward toward the sun before changing direction and heading back to the outer solar system. Along the way, they would have scattered the original asteroid belt before them, then sent material flying back to refill it.

"In the Grand Tack model, the asteroid belt was purged at a very early stage and the surviving members sample a much larger region of the solar nebula," John Chambers of the Carnegie Institution for Science wrote in a "Perspectives" piece published online in the journal Science.

Our solar system isn't the only one to boast an asteroid belt. A cloud of dust around a star known as zeta Leporis looks a lot like a young belt. "Zeta Leporis is a relatively young star — approximately the age of our sun when the Earth was forming," Michael Jura said in a statement. "The system we observed around zeta Leporis is similar to what we think occurred in the early years of our own solar system when planets and asteroids were created." A professor at the University of California, Los Angeles, Jura has since passed away.

Other stars also contain signs of asteroid belts, suggesting that may be common.

At the same time, studies of white dwarfs, sun-like stars at the end of their lifetimes, show signatures of rocky material falling onto their surface that suggest such belts are common around dying systems.

Most of the asteroids in the Main Belt are made of rock and stone, but a small portion of them contain iron and nickel metals. The remaining asteroids are made up of a mix of these, along with carbon-rich materials. Some of the more distant asteroids tend to contain more ices. Although they aren't large enough to maintain an atmosphere, but there is evidence that some asteroids contain water.

Some asteroids are large, solid bodies — there are more than 16 in the belt with a diameter greater than 150 miles (240 km). The largest asteroids, Vesta, Pallas and Hygiea, are 250 miles (400 km) long and bigger. The region also contains the dwarf planet Ceres. At 590 miles (950 km) in diameter, or about a quarter of the size of our moon, Ceres is round yet is considered too small to be a full-fledged planet. However, it makes up approximately a third of the mass of the asteroid belt. [Gallery: Asteroid Pictures]

Other asteroids are piles of rubble held together by gravity. Most asteroids aren't quite massive enough to have achieved a spherical shape and instead are irregular, often resembling a lumpy potato. The asteroid 216 Kleopatra resembles a dog bone.

Asteroids are classified into several types based on their chemical composition and their reflectivity, or albedo.

In 2007, NASA launched a mission, Dawn, to visit Ceres and Vesta. Dawn reached Vesta in 2011 and remained there for over a year before traveling on to reach Ceres in 2015. It will remain in orbit around the dwarf planet until the end of its mission. [Related: Asteroid Vesta and NASA's Dawn Spacecraft]

While most of the asteroid belt is made up of rocky objects, Ceres is an icy body. Hints of organic material spotted by Dawn suggest that it may have formed farther out in the solar system before landing in the belt. While the organics have only been seen on the surface, that doesn't mean more material might lie on the dwarf planet.

"We cannot exclude that there are other locations rich in organics not sampled by the survey, or below the detection limit," Maria Cristina De Sanctis, of the Institute for Space Astrophysics and Space Planetology in Rome, told Space.com by email.

The Main Belt lies between Mars and Jupiter, roughly two to four times the Earth-sun distance, and spans a region about 140 million miles across. Objects in the belt are divided into eight subgroups named after the main asteroids in each group. These groups are the Hungarias, Floras, Phocaea, Koronis, Eos, Themis, Cybeles and Hildas.

Although Hollywood often displays ships making close calls through asteroid belts, the trip is generally uneventful. A number of spacecraft have safely traveled through the asteroid belt without incident, including NASA's New Horizons mission to Pluto.

"Fortunately, the asteroid belt is so huge that, despite its large population of small bodies, the chance of running into one is almost vanishingly small — far less than one in a billion," wrote New Horizons principle investigator Alan Stern. "If you want to come close enough to an asteroid to make detailed studies of it, you have to aim for one."

Within in the asteroid belt are relatively empty regions known as Kirkwood gaps. These gaps correspond to orbital resonances with Jupiter. The gas giant's gravitational pull keeps these regions far emptier than the rest of the belt. In other resonances, the asteroids can be more concentrated.

Discovery of the asteroid belt

Johann Titius, an 18th-century German astronomer, noted a mathematical pattern in the layout of the planets and used it to predict the existence of one between Mars and Jupiter. Astronomers scoured the heavens in search of this missing body. In 1800, 25 astronomers formed a group known as the Celestial Police, each searching 15 degrees of the Zodiac for the missing planet. But the discovery of the first body in this region came from a nonmember, Italian astronomer Giuseppe Piazzi: he named it Ceres. A second body, Pallas, was found a little over a year later.

For some time, both of these objects were referred to as planets. But the discovery rate of these objects increased, and by the beginning of the 19th century, more than 100 had been found. Scientists quickly realized that these were too small to be considered planets, and they began to call them asteroids.

Editor's Note: This article was updated to reflect a correction on Nov. 2, 2018. The original article stated there may be billions or even trillions of asteroids in the Main Asteroid Belt.