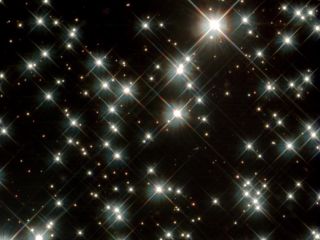 NASA's Hubble Space Telescope captures a field of stellar husks. These ancient white dwarfs are 12 to 13 billion years old, only slightly younger than the universe itself. In theory, white dwarfs will eventually stop emitting light and heat and become black dwarfs.
(Image: © NASA and H. Richer (University of British Columbia).)

The stars in the sky may seem ageless and unchanging, but eventually most of them will turn into white dwarfs, the last observable stage of evolution for low- and medium-mass stars. These dim stellar corpses dot the galaxy, leftovers of stars that once burned bright.

Main-sequence stars, including the sun, form from clouds of dust and gas drawn together by gravity. How the stars evolve through their lifetime depends on their mass. The most massive stars, with eight times the mass of the sun or more, will never become white dwarfs. Instead, at the end of their lives, they will explode in a violent supernova, leaving behind a neutron star or black hole.

Smaller stars, however, will take a slightly more sedate path. Low- to medium-mass stars, such as the sun, will eventually swell up into red giants. After that, the stars shed their outer layers into a ring known as a planetary nebula (early observers thought the nebulas resembled planets such as Neptune and Uranus). The core that is left behind will be a white dwarf, a husk of a star in which no hydrogen fusion occurs.

Smaller stars, such as red dwarfs, don't make it to the red giant state. They simply burn through all of their hydrogen, ending the process as a dim white dwarf. However, red dwarfs take trillions of years to consume their fuel, far longer than the 13.8-billion-year-old age of the universe, so no red dwarfs have yet become white dwarfs.

When a star runs out of fuel, it no longer experiences an outward push from the process of fusion and it collapses inward on itself. White dwarfs contain approximately the mass of the sun but have roughly the radius of Earth, according to Cosmos, the astronomy encyclopedia from Swinburne University in Australia. This makes them among the densest objects in space, beaten out only by neutron stars and black holes. According to NASA, the gravity on the surface of a white dwarf is 350,000 times that of gravity on Earth. That means a 150-pound (68-kilogram) person on Earth would weigh 50 million pounds (22.7 million kg) on the surface of a white dwarf.

White dwarfs reach this incredible density because they are collapsed so tightly that their electrons are smashed together, forming what is called "degenerate matter." The former stars will keep collapsing until the electrons themselves provide enough of an outward-pressing force to halt the crunch. The more mass, the greater the pull inward, so a more massive white dwarf has a smaller radius than its less massive counterpart. Those conditions mean that, after shedding much of its mass during the red giant phase, no white dwarf can exceed 1.4 times the mass of the sun.

When a star swells up to become a red giant, it engulfs its closest planets. But some can still survive. NASA’s Spitzer spacecraft revealed that at least 1 to 3 percent of white dwarf stars have contaminated atmospheres that suggest rocky material has fallen into them.

"In the quest for Earth-like planets, we have now identified numerous systems which are excellent candidates to harbor them," Jay Farihi, a white dwarf researcher at the University of Leicester in England, told Space.com. "Where they persist as white dwarfs, any terrestrial planets will not be habitable, but may have been sites where life developed during a previous epoch."

In one exciting case, researchers have observed the rocky material as it falls into the white dwarf.

"It's exciting and unexpected that we can see this kind of dramatic change on human timescales," Boris Gänsicke, an astronomer at the University of Warwick in England, told Space.com.

Many white dwarfs fade away into relative obscurity, eventually radiating away all of their energy and becoming so-called black dwarfs, but those that share a system with companion stars may suffer a different fate.

If the white dwarf is part of a binary system, it may be able to pull material from its companion onto its surface. Increasing the white dwarf's mass can have some interesting results.

One possibility is that the added mass could cause it to collapse into a much denser neutron star.

A far more explosive result is the Type 1a supernova. As the white dwarf pulls material from a companion star, the temperature increases, eventually triggering a runaway reaction that detonates in a violent supernova that destroys the white dwarf. This process is known as a "single-degenerate model" of a Type 1a supernova. [Know Your Novas: Star Explosions Explained (Infographic)]

In 2012, researchers were able to closely observe the complex shells of gas surrounding one Type 1a supernova in fine detail.

"We really saw, for the first time, detailed evidence of the progenitor for a Type 1a supernova," Benjamin Dilday, the study's lead author and an astronomer at Las Cumbres Observatory Global Telescope Network in California told SPACE.com.

If the companion is another white dwarf instead of an active star, the two stellar corpses merge together to kick off the fireworks. This process is known as a "double-degenerate model" of a Type 1a supernova.

At other times, the white dwarf may pull just enough material from its companion to briefly ignite in a nova, a far smaller explosion. Because the white dwarf remains intact, it can repeat the process several times when it reaches that critical point, breathing life back into the dying star over and over again.

"These are the brightest and most frequent stellar eruptions in the galaxy, and they're often visible to the naked eye," Przemek Mróz, an astronomer at Poland’s Warsaw University, told Space.com.

This article was updated on Oct. 11, 2018 by Space.com Associate Editor, Sarah Lewin.