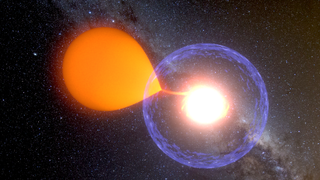 The explosion of a "hibernating" star is revealing insight into how these star eruptions evolve, according to a new study.

A team of astronomers has found evidence of additional mini outbursts leading up to the so-called classical nova — or final explosion of a white dwarf star, the planet-size remains of a star that has burned up its nuclear fuel. Their data provide the first direct evidence for the nova hibernation hypothesis, a theory that suggests a cyclical evolution of such stars.

The nova — called V1213 Cen, or Nova Centauri 2009 — erupted in 2009, but astronomers at the University of Warsaw had been monitoring its source star since 2003. By collecting data for several years before and after the star's eruption, the researchers were able to study the evolution of this type of nova.

Classical novas,such as Nova Centauri 2009, occur in binary star systems, or systems in which two stars orbit around a common center of mass. A white dwarf and another small star orbit a common center of mass while the white dwarf pulls matter away from its companion. Hydrogen from the second star accumulates on the white dwarf's surface, where fusion leads to a big explosion. Unlike the much more powerful supernova explosions, which signify the deaths of stars, nova eruptions don't necessary destroy their stellar parents. [Know Your Novas: Star Explosions Explained (Infographic)]

"These are the brightest and most frequent stellar eruptions in the galaxy, and they're often visible to the naked eye," said Przemek Mróz, the lead author of the study, which is detailed online in the Aug. 17 edition of the journal Nature.

The smaller explosions seen in the years leading up to the big eruption of Nova Centauri 2009 are called dwarf novas. Rather than detonating on the white dwarf's surface, these explosions occur in the accretion disk — the rotating cloud of star stuff that the white dwarf pulls away from its companion, Mróz said. But the timing of nova eruptions remains unpredictable.

Mróz and colleagues studied the dwarf nova outbursts by creating a light curve, or a graph that shows variations in the amount of light coming from a variable star over a period of time. A light curve provides clues to the binary stars' fluctuating mass-transfer rate, or the rate at which one star takes matter away from the other. "Dwarf nova outbursts appear when the mass-transfer rate between the stars is unstable, so each little bump in the light curve is produced by a portion of matter falling onto the surface," he explained.

These events create a cycle, ultimately leading to yet another nova explosion, the theory goes.

"This discovery wouldn't have been possible without the long-term observations by the Optical Gravitational Lensing Experiment(OGLE)," an observational project based at the University of Warsaw, which has been surveying the universe since 1992, Mróz said.