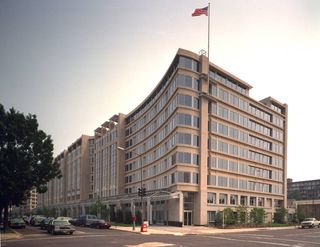 NASA Headquarters in Washington, D.C., houses the higher-ups responsible for charting the space agency's course and implementing its vision. For the record, that vision is: "To reach for new heights and reveal the unknown so that what we do and learn will benefit all humankind."

NASA HQ is located at Two Independence Square, a building in a complex at 300 E Street SW in the nation's capital. It oversees activities conducted at the agency's 10 field centers and a variety of installations scattered around the country. [Infographic: NASA Centers' New Mission]

NASA isn't just about spaceflight and space science, as its full name — the National Aeronautics and Space Administration — makes clear. In fact, the precursor to the agency was the National Advisory Committee for Aeronautics (NACA), which formed in 1915.

The Aeronautics Mission Directorate works to make air travel smoother and safer. The directorate has three main goals, according to its website: 1) Improve gate-to-gate mobility in the nation's commercial air transportation system; 2) Reduce aircraft noise, emissions and fuel use, as well as the overall environmental impact on communities surrounding airports; and 3) Maintain or improve aircraft safety.

Of President Trump's proposed 2018 budget, NASA's acting administrator Robert Lightfoot said in a statement, "This budget also keeps aeronautics on stable footing allowing us to continue our forward movement in many areas, including the New Aviation Horizons initiative."

This directorate manages NASA's human spaceflight operations in low-Earth orbit and beyond. Much of the work is connected with the $100 billion International Space Station, which has hosted astronauts continuously since 2000.

Human Exploration and Operations (HEO) also manages the space agency's efforts to nurture the emerging American private spaceflight industry, which NASA wants to fill the crew- and cargo-carrying shoes of the retired space shuttle fleet. That includes the Commercial Crew and Cargo Program Office (C3PO), with the program goal to "extend human presence in space by enabling an expanding and robust U.S. commercial space transportation industry."

Despite hopes that at least two American commercial spaceships would be ready to ferry astronauts to and from the space station by 2017, the date has been pushed back due to safety concerns. The agency has also inked deals with two companies — California-based SpaceX and Virginia-based Orbital Sciences Corp. — to make supply runs to the orbiting lab with unmanned craft. [Special Report: The Private Space Taxi Race]

But NASA is also working to get people to Mars and other deep-space destinations. To make this happen, the agency is building a huge rocket called the Space Launch System and a capsule known as Orion. However, in a propulsion meeting of the American Institute for Aeronautics and Astronautics in July 2017, Bill Gerstenmaier, head of HEO, responded to a question about when NASA will send humans to the surface of Mars by saying, "I can't put a date on humans on Mars, and the reason really is … the other piece is, at the budget levels we described, this roughly 2 percent increase … we don't have the surface systems available for Mars. And that entry, descent and landing is a huge challenge for us for Mars."

The HEO directorate is relatively new, having been created in August 2011. It combines two previous directorates, which were known as Space Operations and Exploration Systems.

The directorate's cosmic reach is thus vast, spanning missions that study Earth from space to unmanned efforts that explore other worlds such as Mars and Jupiter to space telescopes that peer to the very edge of the observable universe.

For example, Science oversees the $2.5 billion Mars Science Laboratory mission, which dropped the 1-ton Curiosity rover onto the Red Planet's surface on Aug. 5, 2012. And it's responsible for the $8.8 billion James Webb Space Telescope, the successor to the Hubble Space Telescope that's slated for a 2019 launch.

The Science Mission Directorate is receiving $5.7 billion in the enacted 2017 federal budget. (The allocations to NASA's directorates don't add up to the agency's total budget of $19.7 billion because some money goes to construction, field center management and education efforts, among other things.)

Under Trump's 2018 proposal, the budget for planetary science would increase, but the budget for Earth science would decrease. Of that budget, Lightfoot said, "Overall science funding is stable, although some missions in development will not go forward and others will see increases. We remain committed to studying our home planet and the universe, but are reshaping our focus within the resources available to us — a budget not far from where we have been in recent years, and which enables our wide-ranging science work on many fronts."

NASA's Jet Propulsion Laboratory in Pasadena, Calif., has managed many of the space agency's robotic exploration missions over the years. Several other NASA field centers play a large role in the Science Mission Directorate's activities, including Ames and Goddard Space Flight Center in Greenbelt, Md.

The Space Technology Mission Directorate concentrates on developing the technologies NASA needs for its ongoing and future missions — for example, efficient solar-electric propulsion systems that agency officials say will be crucial to crewed Mars efforts down the road.

Such work is not restricted to NASA research centers; technology development commonly occurs via partnerships with government agencies in the United States and abroad, as well as with academia and private industry.