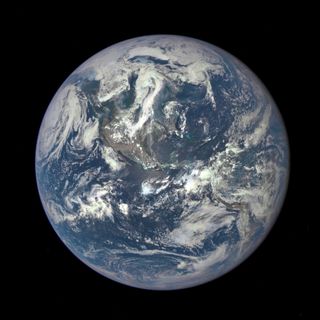 THE WOODLANDS, Texas -- Planetary scientists expressed their displeasure this week with President Trump's recently proposed federal budget, despite the increase of funding it would provide their field.

But many researchers in the packed room focused instead on the hit taken by Earth sciences, a cut that critics have linked to the politics of global warming. [President Trump Signs NASA Transition Authorization Act]

"I personally feel it is short-sighted to be excited about the planetary science budget," Nancy Chabot, a planetary scientist at the Johns Hopkins Applied Physics Laboratory in Laurel, Maryland, told Green during the questions-and-comments part of his presentation. "Planetary science does not live in isolation."

The president's federal budget request, which was unveiled March 16, cuts funding to numerous government agencies dramatically. The Environmental Protection Agency and the State Department, for example, both would lose about 30 percent of their funding if the budget were enacted as-is.

But NASA suffered less than a 1 percent drop to its funding level, down to $19.1 billion. And planetary sciences received a 16 percent increase, a rise that Green said was "historic."

"We've never had a proposed budget this high," he said, noting that the bump is the largest increase for any NASA division.

Green also cited the $3.7 billion slotted for the Space Launch System (SLS) rocket and Orion spacecraft, a duo that NASA is developing to send astronauts to deep space. SLS will also be able to launch robotic missions to other worlds, Green noted.

Ben Bussey, the chief exploration scientist in NASA's Human Exploration and Operations Mission Directorate, was also at Green's talk Monday. He reminded the audience that the proposed budget needs to be reviewed by Congress before going into effect. The next budget deadline will be April 28.

"What we do depends on what we get appropriated," Bussey said. "We won't really know exactly what is happening until we see the appropriations bill."

That idea was repeated multiple times through the session; Green advised a "wait-and-see" approach as scientists expressed dissatisfaction.

The community of lunar and planetary scientists at the conference urged one another to contact elected officials about continuing funding for NASA Earth science. One audience member urged that some of planetary science's funding go to studying our planet. ['Listening to the Planets' to Understand Our Changing Climate (Video)]

"We do that all the time," Green said, pointing to astrobiology and comparative planetary science studies, which investigate Earth environments to help understand other worlds. Those studies are funded by planetary science, he said.

This didn't fully appease the scientists, who burst into applause when one member quoted California Gov. Jerry Brown's statement that the state would launch its own satellites if existing Earth-science spacecraft were shut down.

"Planetary science may receive a short-term gain but a long-term loss if the science community in the United States isn't strong all the way around," Chabot said.

Green also gave a broad update about the status of various NASA planetary-exploration missions. For example, he touched on the three finalist landing sites for the Mars 2020 rover — Jezero Crater, the Northeast Syrtis Major mesas, and Columbia Hills, which lies inside Gusev Crater (which was previously visited by NASA's Spirit rover).

"These are fabulous sites," Green said.

And he discussed a recent NASA "senior review," which unanimously recommended continuing to extend all existing planetary missions that have already passed their primary stage. That includes all of the agency's active Mars rovers and orbiters, the Dawn mission to the dwarf planet Ceres, the Lunar Reconnaissance Orbiter and the New Horizons Pluto probe, which is zooming toward a January 2019 flyby of the faraway Kuiper Belt object 2014 MU69. (That moniker will likely change, however; the New Horizons team, NASA, and the International Astronomical Union are all working to develop a contest or activity to rename the body.)

Green also said that the Juno mission to Jupiter will stay in its current 53-day orbit around the gas giant, rather than move to the originally planned 14-day path. Green emphasized that Juno will be able to complete its minimum science objectives during its prime mission stage, while the probe's journeys through the far reaches of Jupiter's magnetic environment will provide "a richer set of science." The Juno team will begin working with heliophysicists to better understand how charged particles streaming from the sun interact with Jupiter, Green added. [Photos: NASA's Juno Mission to Jupiter]

The OSIRIS-ReX asteroid sample-return mission is also in good condition, Green said. The spacecraft safely passed by a special region in Earth's orbit known as L4 and took the opportunity to hunt for undiscovered space rocks. No announcement of any newfound objects has been made yet, but Green seemed optimistic that one might come in the future.

In the meantime, the Cassini mission is winding down its 13-year study of Saturn. The craft will use the massive moon Titan for one last gravity boost in April, then perform 22 dives between Saturn's cloud tops and its innermost ring before slamming into the planet's atmosphere on purpose on Sept. 15.

Green also announced a planned increase in funding for cubesats, tiny spacecraft that can be built and launched faster and more cheaply than conventional satellites.

Although many cubesats have been launched into orbit around Earth, getting them to other worlds will prove a bit more challenging, Green said.

"Planetary cubesats are kind of difficult," he said, pointing to power and communication needs. Still, "we shouldn't be afraid of that," he said. [Small Satellites Have Big Benefits For NASA (Video)]

Green urged the planetary science community to work with other space-exploration programs, as well as international agencies, to help make planetary cubesats a reality. Cooperation can save time and money as new satellite missions learn from prior tests and launches, reducing the amount of duplicate testing and allowing one group to learn from the mistakes of another, he said.

One way to overcome some of the problems could involve pairing planetary cubesats with larger missions, which could release the tiny craft at the target and communicate their results back to Earth, Green said. The less expensive cubesats could take greater risks than their higher-priced companions.

"That's an important paradigm we think we want to look at and study in future missions," Green said.

The growing private sector of space exploration could provide further scientific opportunities when paired with cubesats, he added. Green pointed to SpaceX's plans to help colonize Mars, and the company's recent announcement that it plans to launch two paying passengers on a trip around the moon by the end of 2018. Depending on the plans and payload limitations, NASA could look at including cubesats on these or future trips.

"I can't promise you, but we want to be able to continue that discussion," Green said.

He went on to announce 10 new cubesat missions that NASA has selected for development. They include two missions each to Venus, Mars, Earth's moon and asteroids. One mission would visit Jupiter, and another would go to Uranus.

"This is a huge step for us, and the start of a new, exciting opportunity," Green said.

Not all the talk Monday was about planetary science. Bussey addressed NASA's continuing work on habitation systems, or "habs," designed to support human missions to deep space, including journeys to Mars.

In addition to the human component, a space-based hab would provide intriguing opportunities for science. Not all of this work would require human intervention; many experiments could be set in the hab and left. But Bussey reassured the assembled scientists that habs won't replace robotic missions to other worlds.

According to Bussey, NASA's present strategy involves placing a deep-space hab in lunar orbit, then going straight on to Mars.

"The current NASA plans don't involve going to the lunar surface before going on to Mars," he said.

He pointed toward international plans to get to the moon, noting that the next humans to set foot on the lunar surface may not be NASA astronauts.