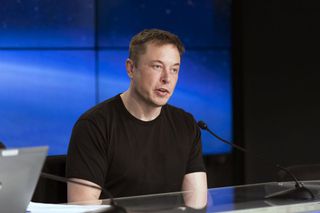 A tweet has gotten Elon Musk in hot water with the Securities and Exchange Commission (SEC) yet again.

The SEC has asked a federal judge to hold the SpaceX boss in contempt for a Feb. 19 tweet about his electric-car company, Tesla, Ars Technica reported yesterday (Feb. 25).

"Tesla made 0 cars in 2011, but will make around 500k in 2019," the offending tweet reads. This was misleading, according to SEC officials, because the true output for this year will be considerably lower.

Musk issued a clarifying tweet a few hours after the first one: "Meant to say annualized production rate at end of 2019 probably around 500k, ie 10k cars/week. Deliveries for year still estimated to be about 400k."

Meant to say annualized production rate at end of 2019 probably around 500k, ie 10k cars/week. Deliveries for year still estimated to be about 400k.February 20, 2019

But the damage had been done — and on two fronts, because the SEC determined that the billionaire entrepreneur hadn't gotten pre-approval from Tesla lawyers before posting the "500k" tweet. Musk must get such approval before tweeting any information that may affect Tesla's stock price, according to the October settlement that resolved his first spat with the SEC.

That previous battle stemmed from an Aug. 7 tweet by Musk, which stated that he was considering taking the publicly traded Tesla private and had already secured funding to do so, at $420 per share. The SEC deemed these statements "false and misleading" and sued the Tesla and SpaceX chief in September.

But the settlement hasn't made the billionaire docile and conciliatory. As yesterday's Ars Technica piece noted, he recently told the CBS news show "60 Minutes" that he doesn't respect the SEC. And today (Feb. 26), he said via Twitter that "something is broken with SEC oversight."

The Ars Technica story has many more details about the Musk-SEC saga. Read it here.