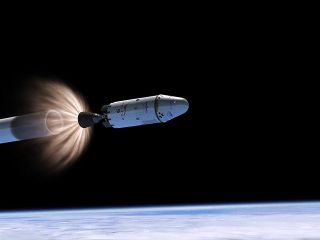 SpaceX views Falcon 9 as a stepping-stone to an even heavier-lift rocket, called the Falcon Heavy. Still under development and expected for a test launch in 2017, this rocket is expected to send up to 117,000 lbs. (53,000 kilograms) of cargo into space. This is about twice the weight the space shuttle used to be able to bring into space.

Starting in 2013, SpaceX made some flights of the Falcon 9 using a first stage that it says could be reusable, providing it lands in the right way. The company has achieved soft landings in the ocean and also on land. On April 8, 2016, a Dragon rocket booster landed on a drone ship in the Atlantic Ocean. It was the fifth attempt in 15 months.

The Falcon 9 is a two-stage rocket. The first stage has nine Merlin engines and aluminum-lithium alloy tanks containing liquid oxygen and rocket-grade kerosene (RP-1) propellant, according to SpaceX.

The second stage has one engine that ignites after stage separation.

SpaceX first trumpeted the Falcon 9's existence in a press release in 2005. Then priced at up to $35 million per flight (today it's $61.2 million), the rocket was developed in response to customer demand, the company said.

At the time, SpaceX was developing the lighter Falcon 1 rocket, and planned to gradually increase capabilities with an "intermediate class" Falcon 5 launcher.

"However, in response to customer requirements for low-cost enhanced launch capability, SpaceX accelerated development of an [expendable launch]-class vehicle, upgrading Falcon 5 to Falcon 9," the firm stated.

Early listed customers of the rocket included companies such as Bigelow Aerospace, Avanti Communications and MacDonald, Dettwiler and Associates.

According to SpaceX, it cost over $300 million to develop the vehicle "from a blank sheet to first launch in four and half years."

The company was a winner of one of NASA's sought-after commercial orbital transportation services contracts, which was worth up to $278 million for SpaceX provided it met all its milestones. SpaceX is one of the awarded companies under NASA's Commercial Crew Program. The program, aims to launch astronauts to the International Space Station using American vehicles around 2018.

SpaceX spent the year testing the engines, culminating in a "full mission-length firing" in November of that year. In an update to its followers, the California-based company touted the rocket's ability to compensate for failed engines in flight — a selling point to customers.

"The test firing validated the design of SpaceX's use of nine engines on the first stage, as well as the ability to shut down engines without affecting the functioning of the remaining engines," SpaceX wrote in November 2008.

"This demonstrates the ability of Falcon 9 to lose engines in flight and still complete its mission successfully, much as a commercial airliner is designed to be safe in the event of an engine loss. Like an airliner, the Falcon 9 engines are enclosed in a protective sheath that ensures a fire or destructive loss of an engine doesn't affect the rest of the vehicle."

Falcon 9 was designed to lift the Dragon spacecraft. NASA provided money across several commercial crew contracts to help fund Dragon's development, as its primary customer was intended to be NASA cargo flights to the International Space Station. SpaceX made a world-first visit to the station with Dragon in 2012, and is now one of two private-company providers for regular cargo ISS flights (along with Orbital Sciences', which flies Cygnus spacecraft).

On Jan. 12, 2009, the Falcon 9 rocket rose to a vertical position at Cape Canaveral. It would be several months before the rocket soared into space, but SpaceX said the configuration was necessary to test all the systems in the next year.

SpaceX hoped to send the rocket up in 2009, but the actual launch date was June 7, 2010. The rocket passed all of the expected milestones, but encountered an unexpected roll during launch.

Because the Dragon spacecraft was still under development, the rocket carried a dummy payload into space. Falcon 9 finally fueled the Dragon's fire on Dec. 8, 2010. It was the first time a rocket had carried a private unmanned space capsule into space, which then returned safely to Earth.

While Falcon 9 successfully brought Dragon to space several times, the rocket has experienced some growing pains. For example, an engine problem forced an abort before Dragon soared to the ISS for a test flight in May 2012.

An engine problem also marred Dragon's first official cargo run to the station five months later. Dragon arrived safely at its destination, but a satellite on board did not. Orbcomm's prototype satellite messaging service satellite fell out of orbit early, just five days after launch. However, the New Jersey company said it had received some test data during the satellite's brief stay in space.

Falcon 9's most catastrophic moment came in June 2015, when the rocket exploded in mid-air while carrying a Dragon spacecraft that was supposed to resupply the International Space Station. The cause was traced to a faulty strut and flights were suspended for several months. [Gallery: The Falcon and Dragons of SpaceX]

SpaceX wants to use its experience with Falcon 9 to develop an even heavier-lift rocket: the Falcon Heavy. The first test launch for this rocket is expected in 2016.

In 2011, the company stated it hoped to use Falcon Heavy to break into the defense market, then dominated by United Launch Alliance. SpaceX and the Air Force settled a lawsuit in 2015 that was related to a ULA contract award.

By 2013 and 2014, some critics charged that SpaceX was launching far fewer flights than planned. Simultaneously, the company began flying a version of the Falcon 9 with a reusable first stage. The aim is to shave launch costs.