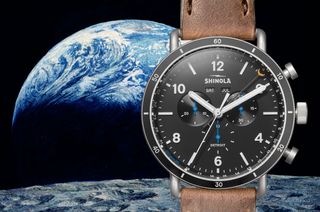 A new timepiece beams a spotlight on the life of an Apollo astronaut who landed on the moon 49 years ago this week.

Detroit-based Shinola has launched "Moon Bean," a wristwatch styled in tribute to the late moonwalker Alan Bean. On Nov. 19, 1969, Bean became only the fourth person in history to set foot on the moon as lunar module pilot on NASA's Apollo 12 mission.

The Moon Bean incorporates several nods to the astronaut-turned-artist, who oversaw development of the watch before his death in May. Bean was interred at Arlington National Cemetery in Virginia on Nov. 8.

"Every detail of this limited-edition timepiece was designed under the watchful eye of Alan Bean," said Shinola's founder Tom Kartsotis in a statement. "American greatness personified, this watch not only honors his legend, but the mission Alan left behind for his friends at Shinola: to create world class products and meaningful jobs in a country he dearly loved."

The Moon Bean features a black dial punctuated by bright blue hands on three sub-dials. The color references the blue Velcro and other labeling used to identify Bean's personal equipment, food and effects aboard the Apollo 12 spacecraft.

The "19" and "20" on the dial's date ring are similarly highlighted, signifying the dates of Bean's arrival on and departure from the moon. Bean and Apollo 12 commander Charles "Pete" Conrad landed on the moon's Ocean of Storms on Nov. 19, 1969, and left the lunar surface the following day. They returned to Earth with command module pilot Richard Gordon, splashing down on Nov. 24, 1969.

The Moon Bean's stainless steel caseback is engraved with Bean's autograph and a textured depiction of one of his paintings, "Kissing the Earth."

"As I looked out my small triangular shaped forward window [of the lunar module], I could see the sharply curved horizon. We indeed were orbiting a body much smaller than the Earth. As I looked, the Earth, some 239,000 miles [385,000 kilometers] away now, appeared to rapidly rise," wrote Bean of the his inspiration for the 1994 painting, which features the planet rising above the lunar surface.

"It was breathtaking," recalled Bean. "After returning to Earth, I had to paint my experience."

The Moon Bean wristwatch, which is limited to 500 pieces and retails for $1500 each, comes packaged from Shinola in a keepsake box with a copy of Bean's 2009 book "Painting Apollo: First Artist on Another World." The set also includes a pouch with strap changing tools and a black nylon strap. The timepiece comes outfitted with a tan leather strap.

"We are proud to present Moon Bean," said Kartsotis, who befriended Bean in 1999. "Al's journey influenced many of the ideas and much of the spirit that was at the base of the creation of Shinola."