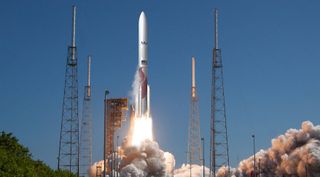 The first Vulcan launch is now scheduled for April 2021 to take into account changes in the Air Force schedule for the program that is helping fund its development, ULA says.
(Image: © ULA)

HUNTSVILLE, Ala. — United Launch Alliance now expects to perform the first launch of its next-generation Vulcan rocket in the spring of 2021, a slip of nearly a year that the company says is due to requirements of a recent Air Force award.

"We're making good progress on the development" of Vulcan, he said. "Our first certification flight is targeted for April of '21. We were really excited about the results of the Air Force's LSA procurement. We're off and marching." [Launch Photos: NASA's InSight Mars Lander Blasts Off on Atlas V Rocket ]

As recently as last month, though, ULA said the first Vulcan launch was scheduled for 2020, a date the company had bene holding for some time. In a Sept. 27 release about its selection of Blue Origin's BE-4 engine for Vulcan's first stage, the company said the vehicle "is on track for its initial flight in mid-2020."

Asked during a panel at the World Satellite Business Week conference in Paris Sept. 11 if Vulcan was still scheduled for a first launch in 2020, Tory Bruno, president and chief executive of ULA, offered a one-word response: "Yes."

In an interview after the panel, Elbon said the shift in the first launch to April 2021 is linked to the requirements of the LSA award from the Air Force. "As the procurement schedule was laid out, the Air Force schedule changed, and we synced up with that," he said, adding that the company was moving ahead with more aggressive internal schedules for Vulcan's development.

"While ULA was on schedule from a technical standpoint to meet 2020 target, once we reviewed the Air Force's timeline in the LSA proposals & incorporated [additional] requirements into our plan, we aligned #VulcanCentaur launch dates to meet the Air Force schedule," the company tweeted.

While ULA was on schedule from a technical standpoint to meet 2020 target, once we reviewed the Air Force's timeline in the LSA proposals & incorporated add'l requirements into our plan, we aligned #VulcanCentaur launch dates to meet the Air Force schedule

That initial April 2021 launch will be followed by a second in August 2021, Elbon said. Those launches are needed to win certification by the Air Force for military payloads. "Then we'll be ready shortly after that for national security missions," he said.

ULA is not alone in slipping schedules for launch vehicles. Blue Origin had previously planned to introduce its New Glenn orbital vehicle in 2020, but company executives have in recent weeks said the vehicle — which, like Vulcan, uses the BE-4 engine in its first stage — is now likely to enter service in 2021.

"We are moving at a very quick speed so that we can get to a launch in 2021," said Clay Mowry, vice president of sales, marketing and customer experience at Blue Origin, during an Oct. 19 Washington Space Business Roundtable luncheon speech. "We were hoping actually to pull that forward to 2020, but right now we are thinking 2021 will be when we first fly."

Northrop Grumman, who, like Blue Origin and ULA received an LSA award this month, has been sticking to a 2021 first launch for its OmegA vehicle. "The vehicle is well into development," said John Steinmeyer, director of space launch business development at Northrop Grumman Innovation Systems (formerly Orbital ATK), during the von Braun Symposium panel. The company is on schedule for a static-fire test of solid rocket booster segments that will be used by OmegA in the second quarter of 2019, he said, "and initial launch capability in 2021." [In Photos: ULA's Zip Line Astronaut Escape System for Boeing's Starliner ]

SpaceX did not receive an LSA award, to the surprise of many in the industry. The company has not disclosed details of its proposal or even confirmed that it bid on the competition, although industry sources believe the company did compete.

Lars Hoffman, senior director of government sales at SpaceX, declined to directly address the LSA competition when asked about it during the panel, emphasizing instead the company's ongoing business performing launches for the Air Force as well as an earlier agreement with the Air Force to help fund development of SpaceX's Raptor engine, which the company plans to use in its Big Falcon Rocket vehicle.

"We are diversified across multiple markets," he said, including commercial, civil and national security. "We expect that partnership with the Air Force to continue into the future."

Caleb Henry contributed to this article from Washington.