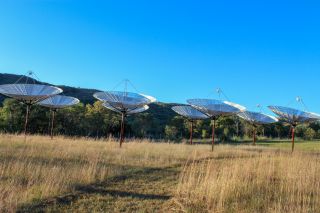 South Africa is becoming one of the world's most important radio astronomy hubs, thanks in large part to its role as co-host of the Square Kilometre Array (SKA). Now a new telescope is being unveiled that will be built at the SKA South Africa site in the Karoo. The Hydrogen Intensity and Real-time Analysis eXperiment (HIRAX) project is an international collaboration being led by scientists from the University of KwaZulu-Natal. The Conversation Africa chatted to project leader Professor Kavilan Moodley about HIRAX's scientific goals.

What will HIRAX do, and how?

Dark energy is a mysterious force driving the accelerated expansion of our universe. HIRAX can study it using a unique cosmic ruler provided by nature, called baryon acoustic oscillations. These were generated in the very early universe, which was a hot and dense soup of particles and light. Small irregularities gave rise to sound waves in this primordial soup.

These waves carried matter as they travelled until a time when matter and light separated, distributing matter in a very characteristic pattern. Neutral hydrogen gas is a great tracer of the universe's matter distribution. This neutral hydrogen emits a signal at 1420 MHz, which is in the range of frequencies used by cellular networks and UHF television channels; the signal gets stretched to lower frequencies as the universe expands.

HIRAX will operate between 400 and 800 MHz allowing it to map neutral hydrogen in the universe between 7 to 11 billion years ago. Studying the characteristics of dark energy during this time has the potential to unravel its properties, as this is a vital time when dark energy became the primary component in the universe and accelerated its expansion.

The second focus area involves mysterious bright, millisecond flashes that scientists call fast radio bursts. Scientists do not know what causes these. They're also hard to detect and localise since they're so brief and most telescopes only observe a small region of the sky.

HIRAX's large field of view will allow it to observe large portions of sky daily – so when the flashes happen, the instrument will be more likely to see them. We expect that it'll see up to a dozen of these flashes a day; to put that in perspective, only a few dozen in total have ever been observed.

And HIRAX will add the unique capability of being able to figure out exactly where in the sky these fast radio bursts occur, by working with several other Southern African countries to build 8-dish outrigger arrays. These, in combination with the main array, will help localise these bursts to within their hosting galaxies.

It sounds like HIRAX will be collecting huge amounts of data?

It will need to collect large amounts of data at a rate of around 6.5 Terabits per second. That's comparable to all of Africa's international bandwidth. For that, HIRAX needs to design and manufacture high precision dishes, receivers and other instrumentation; we're working with local companies on this challenge.

Then the team will need to figure out smart ways to compress, store and analyse this data. That will require big data hardware and software.

We hope that the design and manufacturing abilities required to equip HIRAX properly will open up many opportunities for local industries in the region around the SKA project.

Is this an SKA project, or entirely separate but using space and technology at the SKA?

The project originated as a response by UKZN and its partner institutions to a call for institutional flagship projects by the National Research Foundation. So it's independent from the SKA and its precursor, the MeerKAT – but will benefit greatly from the South African investment in the SKA project, which gives it access to excellent infrastructure hosted by the South African Radio Astronomy Observatory.

By sharing a location with MeerKAT on the SKA South Africa site, HIRAX will be able to conduct science in "radio-clear" skies across its wide frequency range; legislation has been introduced to limit radio frequency interference on the SKA SA site. It's also a great space because it allows access to the southern sky covered by other cosmological surveys and, in turn, more of the galaxy where we'll find pulsars.

HIRAX will also contribute to training the next generation of scientists for the SKA; students working on the project will be trained in all aspects of the telescope, from engineering to science. Students who build hardware are also involved in data analysis, which provides a special environment for training upcoming radio astronomy experts.

Finally, there are strong scientific synergies with MeerKAT (which was officially launched in July 2018). If HIRAX discovers any interesting new pulsars, for instance, MeerKAT can conduct follow-up timing observations at higher frequencies.

This article by co-authored by Carolyn Crichton, a technical writer with the HIRAX Project. Before joining the project, she worked for five years at NASA's Goddard Space Flight Center in the US.