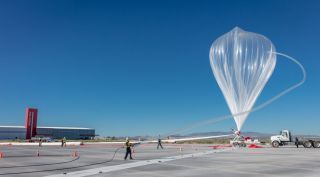 A World View stratospheric balloon, or "stratollite," is prepared for launch from the company's Tucson, Arizona, headquarters in October 2017.
(Image: © World View)

WASHINGTON — World View, the Arizona company developing high-altitude balloons to provide services typically performed by satellites, announced March 29 that it has raised $26.5 million in a round that marks the entry of another high-profile venture capital firm into the space industry.

The company declined to disclose its total investment to date, but in addition to the Series B and C rounds, the company raised $7 million in an earlier Series A, bringing the total from those three rounds to $48.5 million. [World View's Near-Space Tourism Balloon Rides in Pictures]

In a statement, World View said it would use the funding to accelerate development of its "stratollites," a high-altitude balloon system designed to carry communications, imaging, science and other payloads into the stratosphere for extended periods, supporting applications that have often previously been reserved for satellites.

The company has been testing its stratollite technology for the last few years, making flights of increasing duration. Payloads have ranged from experiments whose flights were arranged by NASA's Flight Opportunities program to a chicken sandwich flown as a publicity stunt for a fast food restaurant chain.

"We're now in a high-tempo flight rate and really expanding the duration for our flights," Poynter said in December at the Next-Generation Suborbital Researchers Conference in Colorado. She said the company had a "really full" manifest for 2018 but did not disclose the number of flights planned.

World View's Tucson, Arizona, headquarters and test facility, built by the county government as part of an economic incentive deal with the company, suffered damage during a test incident in late December. A balloon filled with hydrogen burst on a pad adjacent to the complex. That caused $200,000 in damage that was covered by an insurance policy, according to a local news report in February.

The company said in a statement shortly after that incident that hydrogen is used only for ground tests "when required by customers or test objectives," and that the company uses helium for its flights. However, at the Next-Generation Suborbital Researchers Conference, Poynter said the use of hydrogen for operational flights "is still on our radar."

World View was founded to develop high-altitude balloons originally for tourism, carrying people into the stratosphere for hours at a time to give customers a near-space view of the Earth in competition with suborbital spaceflight companies like Blue Origin and Virgin Galactic. The company in recent years, though, has focused its attention and resources on its uncrewed stratollite platforms, indefinitely deferring its tourism plans, and this funding round continues that trend.

"This financing will primarily be used to focus on developing the uncrewed Stratollite into a commercially viable, long-duration flight platform," a company spokesperson told SpaceNews, noting that the crewed vehicle, called Voyager, is still important to the company and can take advantage of stratollite technologies. "But right now we're going to drive some focus into developing and commercializing the Stratollite."

The funding is also a milestone for investment in the broader space industry. World View is the first space-related investment for Accel, a VC firm that has previously backed companies like Facebook, Dropbox and Spotify. Sameer Ghandi, a partner at Accel, will join World View's board of directors.

"World View's proven technology offers unique and low-cost access to the space environment, and we share World View's belief that innovation in the stratosphere has the potential to unlock many new applications with unprecedented benefit," Ghandi said in a statement.

"We're thrilled to partner with such accomplished Silicon Valley venture firms to execute on World View's bold vision to pioneer a new economy in the Stratosphere," Poynter said in the statement of the investment by Accel and the other VC firms that participated in the latest round.

World View also announced that Tom Ingersoll was joining the company as executive chairman, providing leadership and guidance for company operations and reporting to the company's board. Ingersoll was previously chief executive of Skybox Imaging, a startup that planned the development of a constellation of small, high-resolution imaging satellites. He guided the company through its 2014 acquisition by Google, who renamed it Terra Bella. Planet acquired Terra Bella from Google last year.