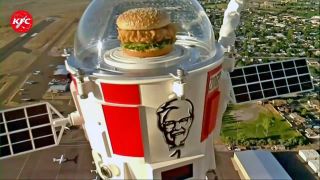 A KFC chicken sandwich launched on a mision to the stratosphere aboard a World View Stratollite balloon at 9:11 a.m. EDT (1311 GMT) on June 29.
(Image: © KFC)

In what appears to be a historic first, a fast-food chicken sandwich was successfully carried to the edge of space today aboard a high-altitude balloon.

The Kentucky Fried Chicken Zinger sandwich journeyed skyward aboard a World View Enterprises Stratollite balloon vehicle at 9:11 a.m. EDT (1311 GMT) from Page, Arizona. While the live webcast cut out before liftoff, a representative for World View confirmed that the launch was successful, and KFC later released a video of the balloon taking off.

"Holy cow, that's some spicy, crispy chicken moving out at an average rate of 1,000 feet per minute [304 meters per minute]," the announcer in the KFC video said as the balloon lofted skyward. "The Zinger should arrive at target altitude in about 1 hour and 20 minutes, where the Zinger mission will officially begin."

The sandwich is scheduled to remain aloft for four days and maintain an altitude of about 50,000 to 80,000 feet (15,200 to 24,400 meters). During the flight, which is serving as an advertising campaign for Kentucky Fried Chicken (KFC), the company will execute various activities to engage the public over social media, including a coupon drop, in which a coupon will literally be dropped from the balloon down to Earth.

"The team on the ground here is justifiably celebrating as they watch their months of hard work pay off," the video announcer said. "This is the greatest achievement in chicken sandwich space travel history. In all my years in this business I've certainly never seen anything like it. What a time to be alive."

The Zinger-1 mission will serve as a test flight for World View, which aims to make stratospheric balloons that can remain in flight for months at a time. The flight is scheduled to be the first "extended-duration development flight of [World View's] high-altitude Stratollite vehicle," according to a statement from the company.

World View's high-altitude balloons are designed to operate in a region of the atmosphere that is too high for most commercial airliners, but too low for satellites. The Stratollite vehicles are expected to be able to reach altitudes of up to 28.5 miles or about 150,000 feet (45.8 kilometers), which means they would remain below the Karman line; at 62 miles (100 km) above the Earth, this line is considered the boundary of "space."

The company has said it plans to use these balloons for scientific endeavors such as Earth imaging, weather monitoring and even astronomical observations. In addition, World View has announced plans to make balloons that can carry humans into the stratosphere as part of scientific missions or for near-space tourism.

While neither KFC nor World View has said exactly how much KFC paid for the flight, World View representatives said that the advertising campaign covered most of the cost of the test flight.

The launch was originally scheduled for June 21, but was delayed due to weather.

Editor's Note: This article previously stated that the World View balloon launched from Tuscon, Arizona; it launched from Page, Arizona.