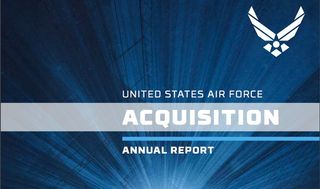 The report cites $13 billion in cost-savings since 2011 and lists a number of initiatives the Air Force is taking to speed up acquisition timelines and performance.

In three of the largest and costliest space programs — the AEHF communications satellites, the SBIRS missile-warning constellation and the evolved expendable launch vehicles — the Air Force claims to have brought prices down considerably.  [The Most Dangerous Space Weapons Concepts Ever]

The original per-unit cost of satellites 5 and 6 of the Advanced Extremely High Frequency system, which provides secure, jam-resistant communications for tactical and strategic missions, was $1.7 billion, the Air Force reported. The current cost is $1.3 billion per satellite, a 23 percent drop.

For the space-based infrared SBIRS satellites 5 and 6, the Air Force says the per-unit cost went down 12 percent — from $1.9 billion to $1.6 billion.

But budget analysts are casting a skeptical eye on these metrics, suggesting that the Air Force picked favorable data points such as the cost of specific satellites in a constellation, instead of looking at the cost of the entire program.

On these three programs, the Air Force's numbers are in sharp contrast to those of the congressional auditors of the Government Accountability Office. In the most recent annual report on space programs, GAO Director of Acquisition and Sourcing Management Cristina Chaplain looked at the expenses in each entire program and came up with results that show soaring costs.

For AEHF, the original program cost for a five-satellite system was projected at $6.9 billion, compared to the current cost of $15 billion for six satellites, according to the GAO report. And the EELV program's original cost of $18.8 billion for 181 launches ballooned to $59.6 billion for 161 launches.

SBIRS at the beginning was expected to cost $5 billion for five satellites, and GAO calculated the total program cost is now $19.2 billion for six satellites.

In a statement to SpaceNews, Chaplain said there are "methodological differences" that explain why one report is showing favorable trends while the other not so much. For SBIRS and AEHF, the Air Force is only reporting on the fifth and sixth satellites, which were "block buys" under each program, she said. The Air Force is not including in its report the development and production costs of the first four satellites — and highly elliptical orbit payloads in the case of SBIRS — which is where the bulk of the cost increases occurred and which make unit costs much higher, noted Chaplain. For EELV, likewise, the Air Force didn't go to the beginning of the program to calculate initial costs. "It's not clear what methodology it used for calculating current costs."

The Air Force said the EELV acquisition strategy was amended in November 2016 and is being executed in two parts. The initial strategy set up a "block buy" deal with United Launch Alliance, "resulting in cost savings of $3.6 billion and stabilization of the industrial base," the Air Force report said. The second phase introduced SpaceX as a competitor. "The Air Force continues to transition from a sole-source environment to a competitive environment with two or more launch providers."

Compared to previous Air Force acquisition reports, the one for fiscal year 2017 has splashier charts and graphs, and was written in a reader-friendly format. An Air Force spokesman said this was the first time the Air Force purposely sought to deliver a "publicly digestible" report on its acquisition programs.